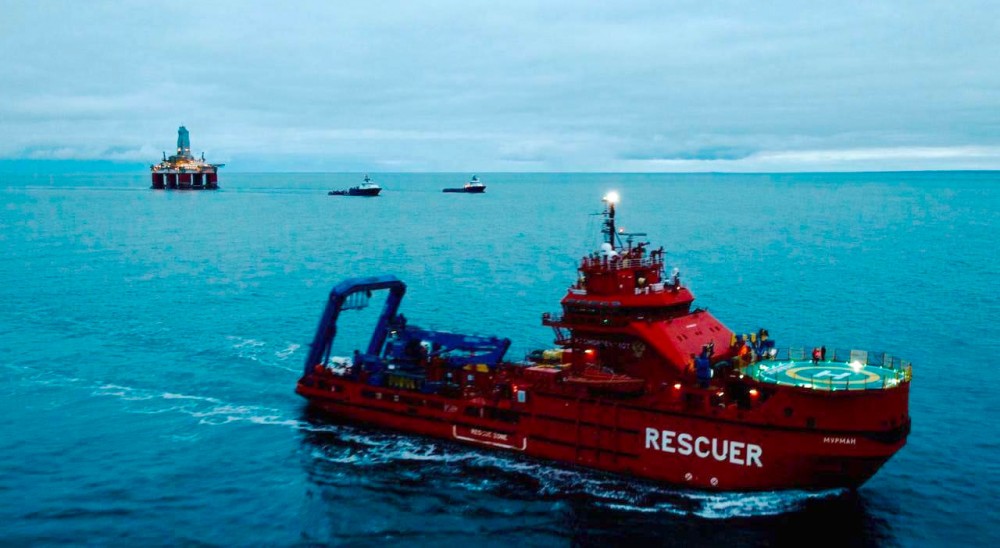 Amid a historical gas crisis, Gazprom hopes to open another giant field at its Ledovoye license area.
Read in Russian | Читать по-русски

The Russian natural gas monopoly is about to be kicked out of its most important markets. But the crisis notwithstanding, the company controlled by Vladimir Putin and his friends still continues to drill for additional resources.

This week, the semisubmersible Severnoye Siyanie made its way into the Barents Sea with, presumably, the Ledovoye license area as its destination.

On 29th of September, the rig reached the license area located in the central part of the Barents Sea, about 300 km west of archipelago Novaya Zemlya. Several tugs and support ships are involved in the operation, among them the Murman, Kazanin Explorer and Neptun.

The rig comes to the Barents Sea after drilling in the Kara Sea, Gazprom informs.

The Ledovoye is considered to be among Gazprom’s most prospective resources, and the company in 2021 announced its plans to drill at the structure. It is located about 70 km north of  Shtokman, the field that for years was described as the world’s biggest offshore natural gas field.

Several foreign companies fought hard to get stakes in the Shtokman Development Company, and the two winners, Statoil (now Equinor) and Total, were both eager to proceed with field development until 2012 when the joint venture with Gazprom collapsed.

The Ledovoye field was long seen as an integral part of the Shtokman development.

Gazprom and its foreign partners in 2012 announced that the project development would be postponed «until better times».

A key reason for the decision was the rapid expansion of shale gas, as well as other major changes in the global gas markets.

«All parties have come to the conclusion that the financing is too high to be able to do it for the time being,» Gazprom Board Member Vsevolod Cherepanov said at a conference in Norway August 2012.

Gazprom never fully closed the door to Shtokman development, and a company program on shelf development until year 2040 includes the project as one of the priorities. The program states that the giant field in the Barents Sea is to come into production by year 2028.