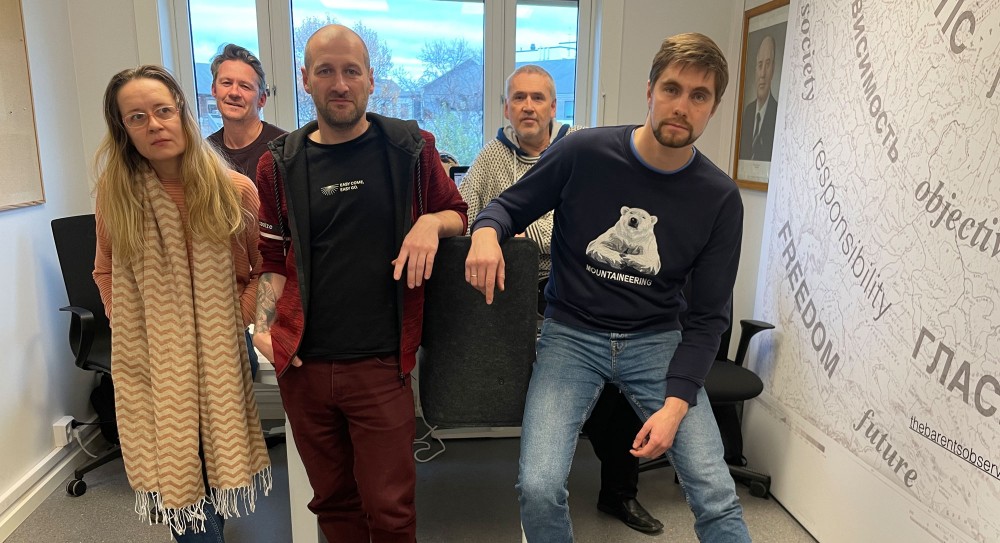 "Now we can freely write and talk." Denis, Georgii and Anastasia are new members of the Barents Observer team

The three experienced reporters have left Russia and Ukraine, and now continue their independent journalism in Kirkenes, Norway.
Read in Russian | Читать по-русски

Denis Zagore and Georgii Chentemirov from respectively Murmansk and Petrozavodsk in late September moved out of Russia to start a new life as independent journalists in the small Norwegian border town.

Do you want to support the Barents Observer? Give your donation here

They left their country as repression against free and independent voices reaches an unprecedented level. Both were also at risk of being mobilised to the war in Ukraine.

Denis and Georgii are experienced journalists with years of work in radio, TV and newspapers.

“Now we can freely write and talk, and produce information about the actual situation in Russia, Norway and the world,” says Denis.

He has worked for several radio and TV stations and media houses in Murmansk. Over the past years he has also operated the Barents Observer podcast service.

Georgii comes from a job as newspaper journalist in Petrozavodsk and is also leader of the Karelian Journalist Union. The organisation is the only of its kind in Russia that has openly spoken out against censorship.

“Independent journalists in Russia are in big danger,” he says, and underlines that the ones left in the country are very brave.

“Russian journalists today have very tough working conditions and constantly struggle with censorship, as well as self-censorship,” he explains.

Denis and Georgii significantly strengthen the news making of the Barents Observer. They will work primarily with the Russian-language edition of the newspaper.

“Here, we can freely write about true developments and about what we find necessary to cover,” says Georgii.

The Barents Observer has also launched cooperation with Anastasia Kharkova, a Ukrainian journalist with many years of experience from Kharkiv. After having lived several weeks in a metro station following heavy Russian bombardments of the city, she fled to Norway in April. Anastasia will work part-time in the newspaper and her employment is supported by the local municipality of Sør-Varanger.

The employment of Denis and Georgii is funded by the Tinius Trust, the Fritt Ord Foundation and others.

With the arrival of the new journalists, the Barents Observer news team more than doubles in size.

“We are very happy to be able to work with Denis, Georgy and Anastasia, and are confident that they will enrich our news making, ” says Publisher Atle Staalesen.

“They significantly strengthen our capability to reach out to audiences in Russia and elsewhere with reliable, independent, fact-based news and information,” he underlines.

The Barents Observer is the only news media in Norway that publishes in English and Russian.

According to Staalesen, Kirkenes is a well-suited place for Russian journalism in exile and he hopes his company ultimately will be able to hire additional colleagues.

“The journalists that flee Russia have great knowledge and understanding about the situation in the country and can help shed light on developments, both for Russian and international audiences,” he says.