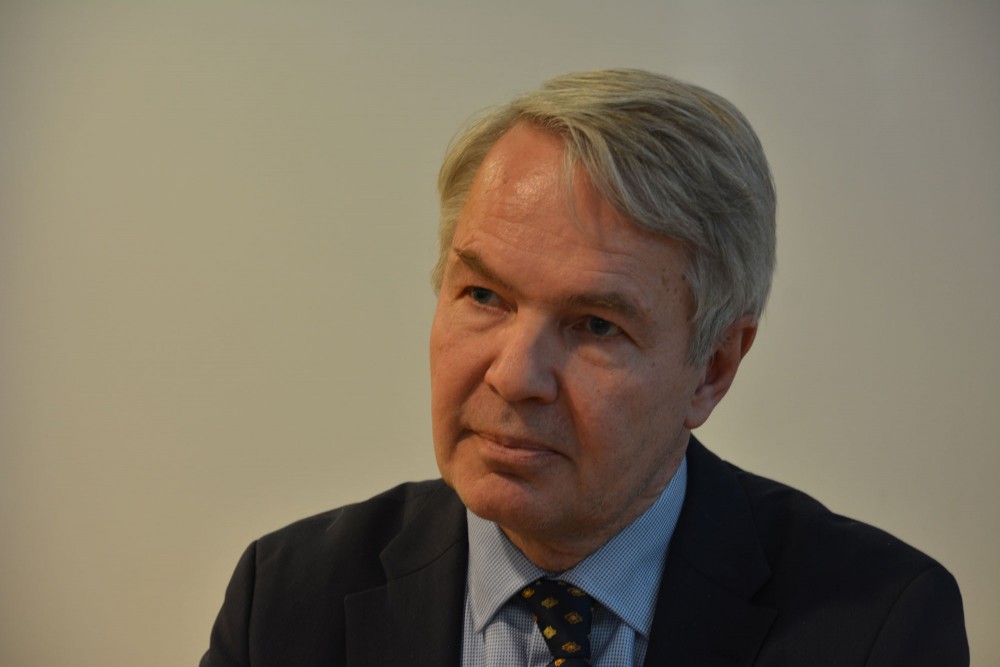 In an increasingly hostile political environment, Helsinki seeks to use its new presidency in the Barents Council to interact with Moscow
Read in Russian | Читать по-русски
By

As Finnish Foreign Minister Pekka Haavisto took the stage in this week’s conference Arctic Spirit, military men from both NATO countries and Russia were preparing new flights, voyages and drills across the High North.

But it was cooperation and not confrontation that was the key point of the Finnish foreign policy chief.

The Arctic must not be a region of militarization, he underlined in the bi-annual conference held in the northern city of Rovaniemi.

The event, Finland’s main international conference on the Arctic, was held shortly after the country took over the rotating presidency of the Barents Council, the cross-border cooperation structure that focuses on the Nordic region and Russia.

There were only few Russian participants in this year’s Arctic Spirit. But the presence of the big eastern neighbor was still very much in the room as participants discussed security and climate in the Barents region and Arctic.

Finland is one of the countries that has upheld close contact with Moscow despite the deteriorating east-west relations, and Finnish President Sauli Niinistö remains one of the most frequent foreign guests in the Kremlin. Judging from information from kremlin.ru, there have been as many as 12 bilateral meetings between Vladimir Putin and Niinisto since the latter was elected in 2012. In addition, the two state leaders have talked on the phone with each other at least 23 times in the period.

The latest meeting between the two presidents was held on the 29th of October this year. Among the key issues discussed in that meeting was climate change and the Arctic.

Also Finnish Foreign Minister Haavisto is regularly in contact with his Russian counterpart and has since he was appointed to the post had at least two bilateral meetings with Sergei Lavrov.

Pekka Haavisto argues that Finland is not actively seeking a role as mediator between Russia and EU. It is natural for Finland to be in close contact with neighboring Russia, he told the Barents Observer in a press conference during the Arctic Spirit. “After all, we are a country that has a 1300 km long border with Russia, which is more than all of the EU together,” he explained.

“We have a lot of cross-border cooperation, and it is very natural for our people to cross the border under various circumstances,” the minister said and added that “we want the situation to be as stable and normal as possible.”

At the same time, Haavisto underlines that Finland is operating “fully in line with the common decisions of the EU.”

Finland and Russia are now both in charge of regional cooperation structures that provide space and opportunity for dialogue. Russia took over the chair of the Arctic Council in May this year and Finland in October took over the Barents Council.

The two bodies are now among the few remaining regional arenas for dialogue with Russia, and Finland is eager to use the opportunity for joint action in the North.

Foreign Minister Haavisto argues that there is still room for cooperation and joint action with Russia, and is promoting a principle of “selective engagement.”  The country’s annexation of the Crimea, its aggression in other parts of eastern Ukraine, as well as its faltering human rights record, makes cooperation within a wide range of areas impossible. But there are still fields of joint interest that can be exploited.

According to the foreign minister, environment and climate are key issues for Finland’s “selective engagement”, and he specifically highlights nuclear waste dumped in Arctic waters during the Soviet period, as well as the problem of black carbon.

In his address delivered at the recent Barents Council meeting in Tromsø, Norway, Haavisto underlined that “climate change, environmental protection and sustainable development are the crucial priorities and the foundation of our work,” and specifically mentioned an updated version of the Barents Climate Change Action Plan.

Much needs to be done, and the EU must play a role, the minister argues.

“Our task as the new chair in the Barents Council is to wake up our colleagues in EU to see this damage that is happening in the region, and also what is happening with the livelihoods and people in the region if this trends [of climate change] are continued,”  he told journalists during the Arctic Spirit.

And efforts must be concentrated on climate change, not militarization, he underlines.

“We should keep the Arctic out of the military tensions, because that would lead us totally in the wrong direction. We should concentrate on the climate issue now.”