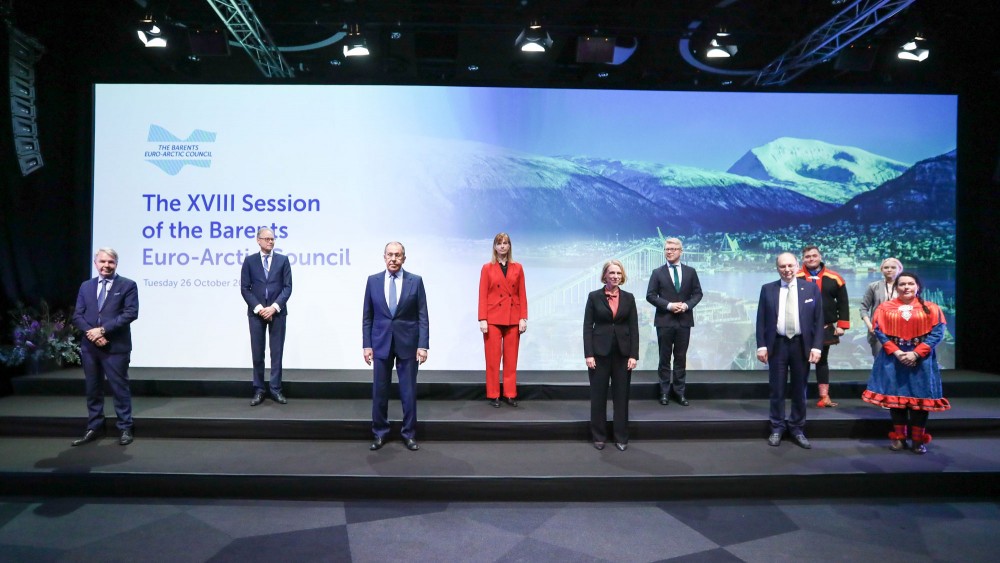 Members of the Barents Euro-Arctic Council pose during the Ministerial Meeting in Tromsø. Photo: mid.ru

Environment and climate change will be our top priorities for the Barents Cooperation, Foreign Minster Pekka Haavisto underlined as he took over the Chair of the Barents Euro-Arctic Council.
Read in Russian | Читать по-русски
By

Finland on Tuesday took over the rotating two-year presidency from Norway in a ceremony in Tromsø.

There were plenty of friendly words and diplomatic gesture when foreign ministers and top government officials assembled in the far northern Norwegian city.

But under the surface was a feeling of tension spurred by growing divides between Russia and its Nordic neighbors. On the eve of the meeting, Russia’s Foreign Minister Sergei Lavrov reiterated his strong dislike with NATO and called on Norway to engage in an enhanced bilateral security cooperation with the Russian Defence Ministry.

But in the Barents Council meeting, there was little focus on national security, east-west controversies and the mounting lack of trust between the countries. On the contrary, on top of the agenda was joint cross-border action, friendship and common initiatives.

That includes the field of environment and climate policy.

According to the Finnish Foreign Minister, climate will be the main priority during his country’s presidency period in the Barents Council.

“Climate change, environmental protection and sustainable development are the crucial priorities and the foundation of our work,” Pekka Haavisto underlined in his address.

The stress on environment is reflected also in the Finnish Presidency Priorities. The document that outlines Finland’s main ambitions for the period underlines that both the EU Green Deal and the UN Agenda 2030 Sustainable Development Goals serve as a basis for Haavisto’s work with the far northern cross-border.

The document says that the Barents region “faces rapid climate change” and that “the region’s future must be built on economic, environmental, social and cultural sustainability, and carbon neutrality.”

“We will seek to bring authorities, scientists and NGOs together to find ways for the Barents region to reduce greenhouse gas and black carbon emissions that originates also from outside the Barents region and adapt to climate change without harming nature or hindering traditional land use,” the document reads.

During this week’s ministerial meeting, the top officials adopted an updated version of the Barents Climate Change Action Plan.

The Ministerial Declaration adopted at the end of the meeting softly reads that the countries are to “encourage efforts to implement the Action Plan in the region, to drive the transition to new low carbon solutions contributing to the introduction of circular economy and environmentally sustainable waste management and the use of clean and renewable energy.”

The Declaration also reaffirms the ambitions of the participants to democratic principles.

The partners are to committing themselves to ensure that the Barents cooperation continues to be characterized by political dialogue, evidence-based knowledge, practical cooperation and people-to-people contacts based on respect for the rule of law, democratic values, human rights, gender equality and the fundamental freedoms.”

The Barents cooperation has since it was formalized in 1993 been a platform for cross-border interaction between Nordic countries Finland, Norway and Sweden, and Northwest Russian regions. The political cooperation is based on the Barents Euro-Arctic Council and the Barents Regional Council, a body with representatives of counties and regional politicians.

The chair of the Barents Euro-Arctic Council now moves from Norway to Finland, while the Barents Regional Council is taken over by Russia’s Nenets Autonomous Okrug from Sweden’s Västerbotten.