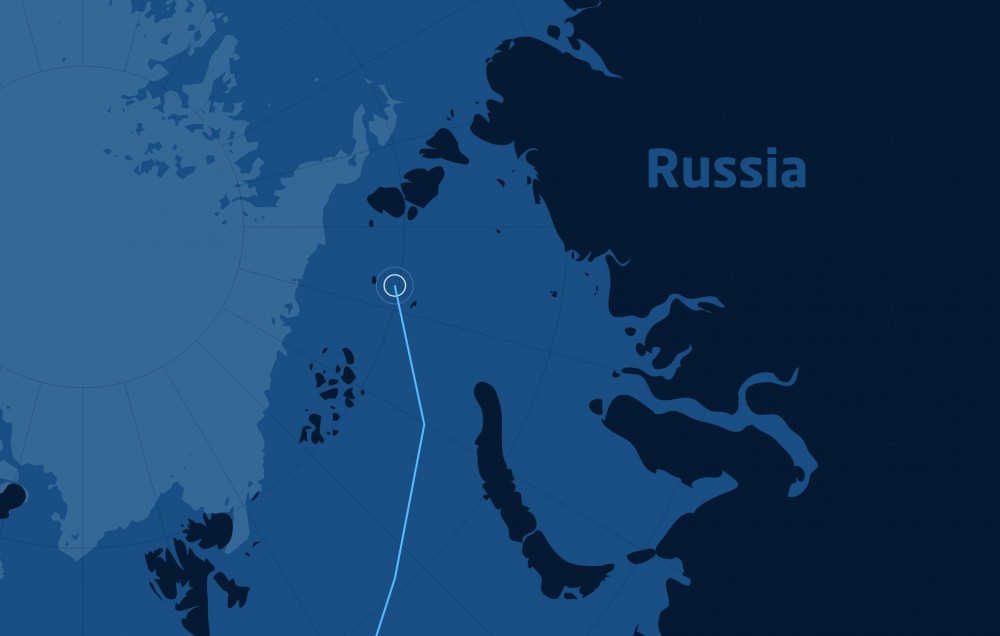 The position of the MOSAiC expedition on 24th September 2019. Map by follow.mosaic-expedition.org

The MOSAiC, the biggest expedition of its kind ever, on Friday set out from Tromsø, Norway, and four days later sailed across the Barents Sea and into the northern parts of the Kara Sea.

By late 24th September, expedition vessel «Polarstern» had made it to 79,5 degrees North, to waters located between the archipelagos of Franz Josef Land and Severnaya Zemlya.

It is a region with an increasing military presence. Russia has built and upgraded several military bases in the area and the Nagurskoye base in the Franz Josef Land is now among the most potent military forces in the whole High Arctic.

Only few days ahead of the arrival of the «Polarstern» to the waters south of Franz Josef Land, three major Russian naval vessels conducted a big shooting exercise in the area. Anti-submarine vessel «Vice-Admiral Kulakov» and big landing ships «Kondopoga» and «Aleksandr Otrakovsky» trained air defense combat and applied several kinds of weaponry, including the nuclear-capable air-launched ballistic missile Kinzhal.

In addition to the more comprehensive training activities, the Northern Fleet has also stepped up its patrolling in the area.

On the 21st of September, the «Vice-Admiral Kulakov» took action against the small sailing vessel «Pangaea» that was on its way through the area. An inspection of ship documents was conducted and the ship subsequently allowed to proceed its Arctic voyage

The “Pangaea” started its voyage in Alaska and sailed into the Arctic from the Bering Strait side with the aim to drop off the two famous explorers Mike Horn and Børge Ousland. They are supposed to ski from about 86 degrees North across the North Pole and to be picked up again by “Pangaea” on the European side of the Arctic later this fall.

The Northern Fleet recently also took action against a commercial ship in the Kara Sea. Cargo vessel «S. Kuznetsov» was halted by marines after suspicions of shipping violations. The action against the ship took place on the 13th September north of the Taymyr Peninsula.

No egangement by the Russian Navy against the «Polarstern» has been reported. The expedition media service on 23rd September reported stable progress towards icy waters. But the expedition team experiences strong winds and up to four meter high waves, a tweet informs.

The ship, a German-built icebreaker operated by the Alfred Wegener Institute for Polar and Marine Research (AWI), will sail deep into the ice and subsequently drift with the ice for a whole year.

Four icebreakers from Russia, Sweden and China will assist the «Polarstern» in the course of the year. Among them will the new Chinese icebreaker «Xue Long 2». In spring 2020, a landing strip will be built on the Arctic ice, to serve German research aircrafts Polar 5 and Polar 6.