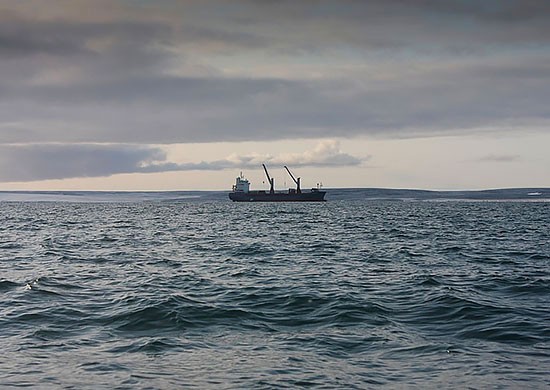 It is believed to be the first time ever that the Northern Fleet takes this kind of action against a commercial ship in the area.

The operation was conducted in the Solnechaya Bay on the northernmost tip of great peninsula Taymyr, the Northern Fleet informs. It was marines from the anti-submarine vessel «Vice-Admiral Kulakov» that conducted the raid.

It was done in cooperation with forces from the Coast Guard.

It is not known what kind of violations that the «S. Kuznetsov» is suspected of. The ship is now located on the coast of the Taymyr Peninsula, coordinates from the Northern Sea Route Administration show.

According to the Northern Fleet, the action against the vessel included control of  premises for staff and cargo, as well as ship documentation and personal crew papers. A series of violations were revealed and legal follow-up is in the making, representatives of the Navy confirm.

The «S. Kuznetsov» is owned by the Northern Shipping Company and has the permission needed for sailing in the area all through fall. Judging from documents from the Sea Route Administration, the ship is allowed to sail in the Arctic waters until 20th February 2020.

The ship has ice-class Arc4. It had been in the Bolshevik Island, a part of archipelago Severnaya Zemlya, to deliver goods.

The remote archipelago is place for the development of a new and upgraded military base.

The operation by the Russian marines was conducted during the ongoing voyage of a powerful Navy flotilla headed by «Vice-Admiral Kulakov».

The voyage started on 5th August and has included a number of exercises, among them along the Yenisey river. The flotilla is expected to proceed through the Laptev Sea and to the New Siberian Islands where a major new military base is now operational.

According to the Northern Fleet, the raid of the «S. Kuznetsov» has provided the first experience in interacting with the Coast Guard in processual action against ships in the Arctic.

The Russian Navy has over the last years significantly strengthened its presence along the Northern Sea Route. However, it is the Coast Guard, a branch of the FSB, that has has the main responsibility for law enforcement in the area

A bill signed in 2016 gives the FSB the full prerogatives for law enforcement in the area.  With the powers formalized, the FSB will autonomously be able to take action against ships operating along the Russian Arctic coast.