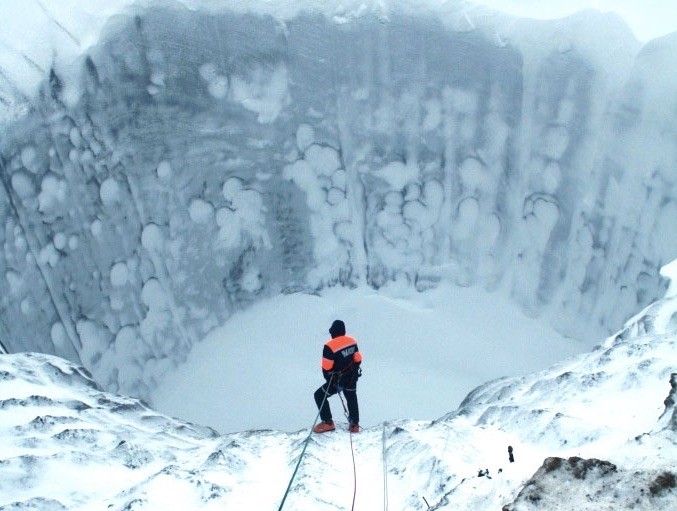 Seismic censors are being installed near key industrial sits and infrastructure objects.
Read in Russian | Читать по-русски
By

«We always thought that Yamal was a seismically quiet territory», says Aleksey Titovsky, leader of the regional Ministry of Science and Innovation. «However, research now shows that movements can take place also in the Arctic earth crust», he adds.

Censors will now be installed in several places around the peninsula. Priority areas are the lands surrounding the Bovanenkovo gas field and the Sabetta sea port, the Yamal-Nenets regional government informs. Also the village of Kharasavey will get sensors.

There is great fear among authorities and oil companies in the area that sinkholes will threaten regional infrastructure and industrial objects. Several sinkholes have been discovered in the peninsula over the last years, the biggest with a diameter up to 60 meters

According to Titovsky, the phenomenon is not only a result of climate change. Research indicate that the sinkholes have appeared along seismic splits, he says in a press release.

The new censors will register motion in the earth crust and send information to satellites which subsequently will be handed by researchers.

The project is a joint effort between the regional government and the Russian Geophysical Service, a unit under the Academy of Sciences. The censors are planned to be put in place in the course of March 2017.

The first sinkholes started to appear on Yamal in 2014. Looking like meteorite craters, the sinkholes drew Russian and world media attention. The largest were several tens of meters deep and up to 60 meters in diameter.

In winter of 2015, another eight new sinkholes were discovered near the giant Bovanenkovo gas field on the Siberian Arctic peninsula. Those sinkholes triggered alarm bells in the offices of Gazprom, Russia’s stateown natural gas giant that has invested billions in developing the Bovanenkovo field. The field is estimated to hold as much as 4,9 trillion cubic meters of natural gas