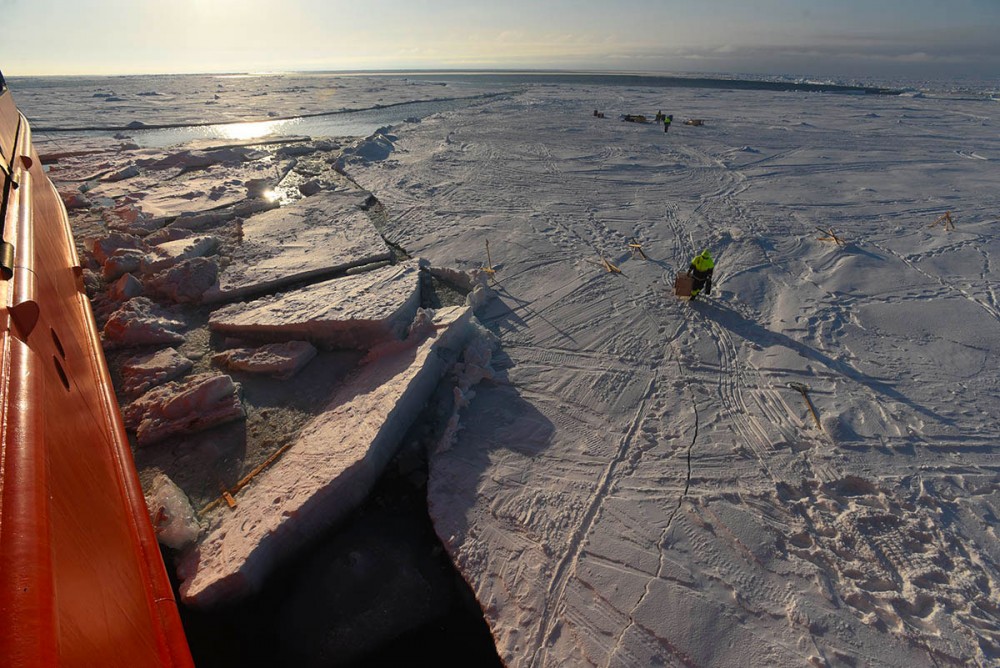 Open waters in sight as Arctic ice breaks up around the Transaktika-2019 expedition. Photo: aari.ru

In a rush, the Russian researchers picked up their gear when the giant ice floe broke into pieces.
Read in Russian | Читать по-русски
By

The researchers from the Russian Hydrometeorological Institute Roshydromet had been on the ice for more than a month when the ice floe suddenly started to vanish under their feet.

In the early morning of the 29th April, an emergency situation was announced and the researchers in a rush packed up their equipment. The whole process took less than 3 hours, the camp organizers say.

Involved in the evacuation was a helicopter that lifted the equipment from the ice onto nearby icebreaking research vessel «Akademik Tryoshnikov». Included in the equipment was a meteorological laboratory and a shed.

The break-up of the ice had been anticipated. The researchers had seen growing cracks in the ice over the preceding days and guards were on 24-hour duty to follow developments.

The expedition is part of Transarktika-2019, a major government-funded project on monitoring pollution in the Arctic. A key part of the project is the expedition with the «Akademik Tryoshnikov». The ship set out from Murmansk on the 20th March and four days later made it into the Arctic ice north of Franz Josef Land.

The vessel has subsequently frozen into the ice and drifted with the current.

The ship and the researchers will now proceed further north to find a new suitable ice floe.

The Transarktika-2019 is organized as the Russian Arctic is undergoing unprecedented climate change with average temperatures far beyond normal. In parts of the region, the average temperatures have increased with up to five degrees Celsius in less than 30 years. The project is supported by government with almost 1 billion rubles.

Russia has a long tradition of organizing research expeditions on drifting Arctic ice. However, over the last few years, it has become increasingly difficult to find ice floes solid enough to hold the research stations.

The last “real” ice station, the “North Pole-40”, was established in October 2012,  and had to be evacuated in May 2013, because the ice floe the base was placed on, started to break apart. The 16 scientists that had spent the winter on the floe had to be rescued by a nuclear-powered icebreaker sent out from Murmansk.

In the future, Russia will organize its drifting Arctic stations only from vessels. In December 2018, ship builders at the Admiralty Yard in St.Petersburg officially started construction of the «North Pole» station. The 84 meter long, 22,5 meter wide platform will be the world’s first research station permanently based in high Arctic waters.

For periods of up to two years at a time, the «North Pole» will be drifting autonomously across the Arctic with a crew of 14 and teams of up to 34 researchers.

Researchers move into Arctic waters, ready to drift with the ice