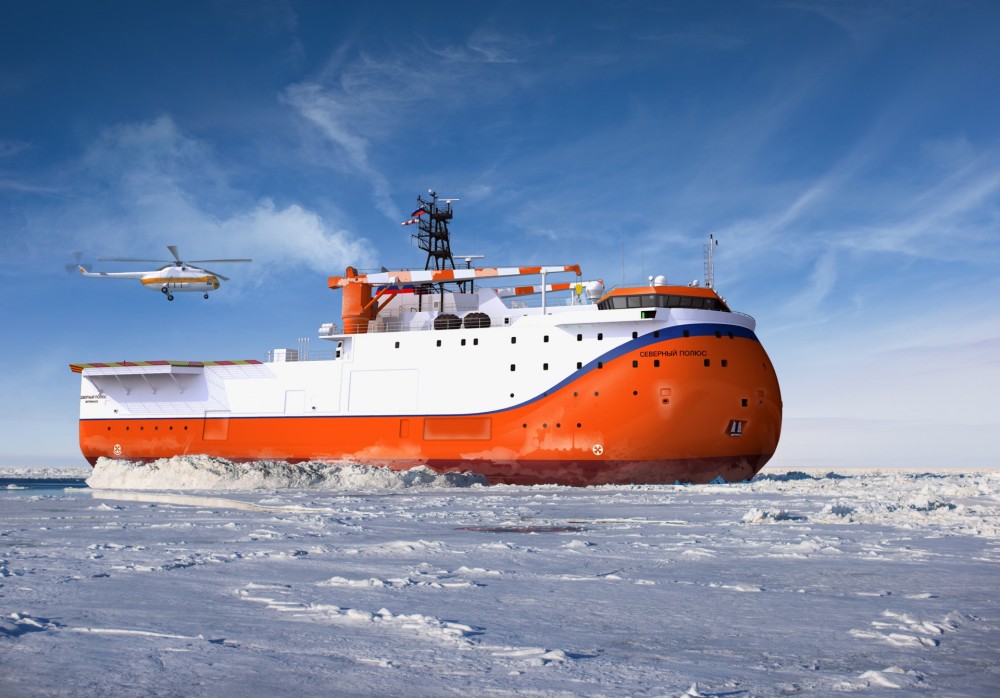 The "North Pole" research station will be able to autonomously drift through Arctic waters for period of up to two years at a time. Illustration: admship.ru

The new installation will be crucial for our studies of the rapid ongoing changes in the region, Russian Arctic research leaders say.
Read in Russian | Читать по-русски
By

There was pride and celebration among the people who on 20th December assembled at the Admiralty Yard in St.Petersburg to mark the official start of construction of the «North Pole» station. The 84 meter long, 22,5 meter wide platform will be the world’s first research station permanently based in high Arctic waters.

It is to be completed in year 2020, and the cutting of metal for the hull officially started on December 21st, Roshydromet informs.

«The cutting of the metal marks the start of the construction of a unique, comfortable and reliable drifting station that undoubtably will open en new page in our national polar history,» said Natalia Radkova, Deputy Director of state meteorological institute Roshydromet.

The station that has got the name «North Pole». It has a deadweight of 10,390 tons and an engine that enables it to move through light ice with a 10 knots speed.

The installation will have permanently have onboard a Mi-8 helicopter.

For periods of up to two years at a time, the «North Pole» will be drifting autonomously across the Arctic with a crew of 14 and teams of up to 34 researchers.

The Russian Arctic and Antarctic Institute already 12 years ago proposed the construction of a permanent platform that would replace the annual drifting stations operated in Arctic waters.

«Since 1937, a total of 40 expeditions have been made, but because of the global warming and melting of the ice in the early 2000s we have been forced to halt the program,» institute Director Aleksandr Makarov said in the ceremony.

«The building of a self-propelled ice-protected platform allows us to continue the important studies of the Arctic Ocean at high altitudes,» he underlined.

According to the research director, the platform will be used for geological, acoustic, geophysical, as well as marine studies. Up to 70 percent of all information on the Arctic territories is today provided by Russia, Makarov made clear in the ceremony at the Admiralty Yard.

The «North Pole» will be able to autonomously break its way through the ice. But it is not the ability to break the ice which is the most important, Makarov underlines. It is the platform’s ability to enable researchers to live in the ice for long periods.

The  is a joint initiative of Roshydromet and the Arctic and Antarctic Institute. The preliminary project investment cost is €98 million.