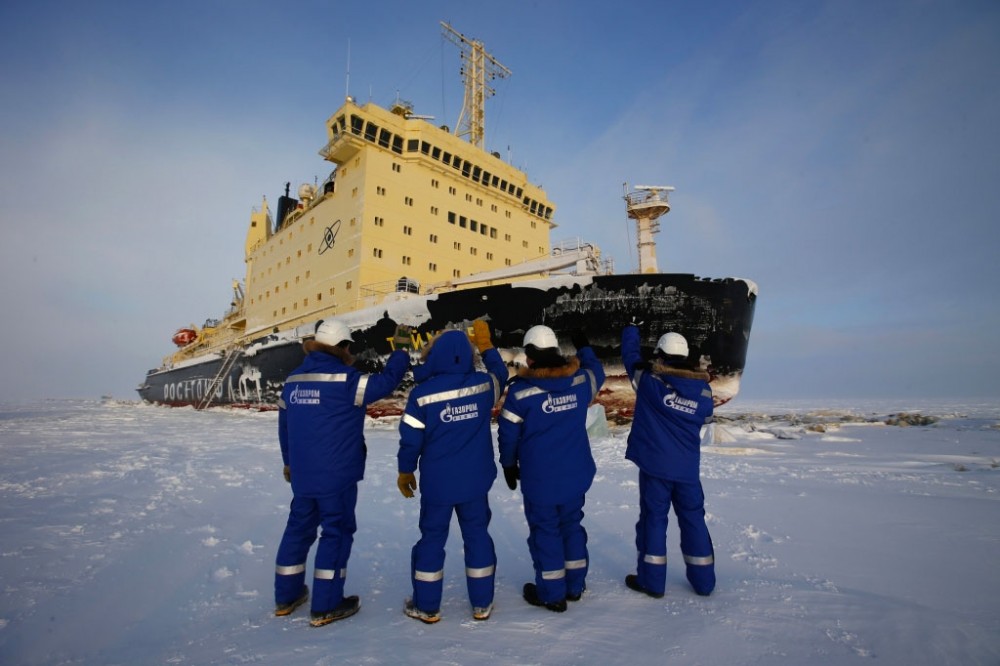 Despite complicated ice conditions, more than 18 million tons of goods has been shipped along the Northern Sea Route in 2018, a 68% growth from 2017.
Read in Russian | Читать по-русскиRead in Chinese | 阅读中文版
By

«It is an explosive growth,» Rosatom representative Maksim Kulenko underlined in a speech this week.  According to Kulenko, about 18 million tons of goods has so far this year been shipped along the Northern Sea Route.

And next year, the volumes are expected to reach 30 million tons, he made clear, TASS reports.

The big growth comes despite this year’s very complicated ice conditions on parts of the route. Both in the Kara Sea and in the East Siberian Sea there were thick ice through major parts of early summer.

Maksim Kulenko is deputy head of state company Rosatom’s new department on the development of the Northern Sea Route (NSR).  He spoke in a conference on the Arctic taking place in Moscow this week.

The company operates Russia’s nuclear-powered icebreaker fleet and is now taking the lead role in the development of Russian Arctic logistics. According to a new federal law, Rosatom is to have the top coordinating role in the management of the NSR.

«All the main operators of Arctic projects are now unequivocally giving priority to exports of exports of their products along the Northern Sea Route,» Kulenko said.

The growth in goods volumes on the route is about 68 percent higher than in 2017, when a total of 10,7 million tons of goods were shipped on the route.

Despite the overwhelming growth, trans-shipments on the route remain sparse. In 2017, less than 200,000 tons was shipped from the Europe to Asia across the Arctic shortcut. In 2018, that trans-continental shipping is likely to remain low.

The Northern Sea Route covers the waters between archipelago Novaya Zemlya and the Bering Strait.

It is hydrocarbons that are the main drivers in the development. Novatek in November this year launched its third train of the Yamal LNG project and annual production has reached 16,5 million tons. The quickly growing fleet of LNG carriers are now shuttling to Sabetta, the project port in Yamal, to pick up the liquefied gas.

In addition comes a major growth in regional oil production. Company Gazprom Neft is this year increasing production at its Novy Port project in Yamal to an estimated 8 million tons, all of which is exported out through the Gulf of Ob.

Over the next years, also coal will constitute a major share of the Russian Arctic shipping. Company VostokUgol and its subsidiary Arctic Mining Company plans to extract and export 30 million tons of coal per year from Taybass, the coal basin on the northern tip of Taymyr peninsula.

Still, Rosatom and the natural resource developers in the Russian Arctic are unlikely to meet the target set by President Vladimir Putin.

In the comprehensive list of goals and strategic objectives handed over by the President to government following his re-inauguration in May this year is a boost in Northern Sea Route shipping to 80 million tons by year 2024.

The decree followed Putin’s speech on the state of the nation in March. Putin then made clear that the Northern Sea Route must be turned into a global, competitive transport artery.

«The Northern Sea Route will be the key to the development of the Russian Arctic and the regions of the Far East. By 2025, its traffic will increase tenfold, to 80 million tons,» he underlined.

However, that is easier said that done.

The Russian Ministry of Natural Resources now silently acknowledges that Putin’s target might be too ambitious. In a conference last month, Ministry representative Sergey Khushchev made clear that he expects volumes on the Arctic route to amount to «only» 63 million tons by 2024.

«The issue of getting additional goods to the Northern Sea Route is critical,» he said.