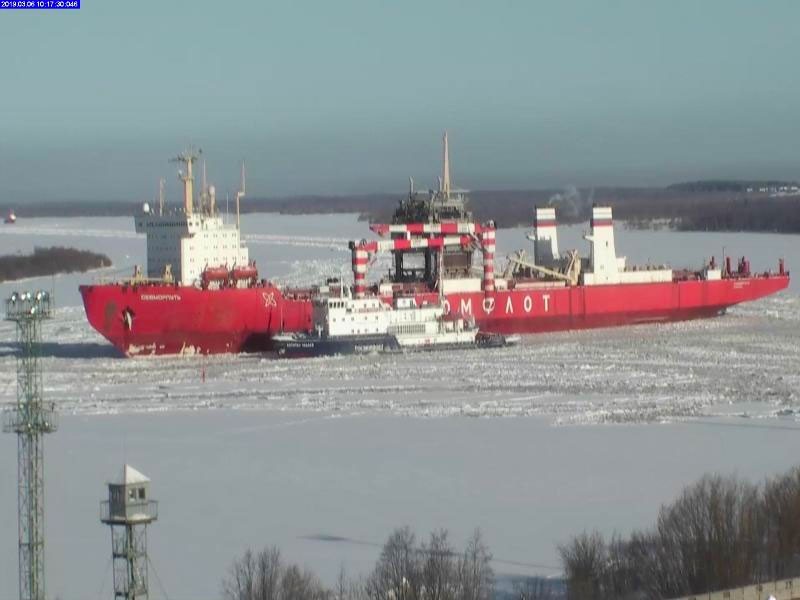 The "Sevmorput" on its way up the Northern Dvina. Photo: Rosmorport

The 260 meter long nuclear-powered «Sevmorput» makes a historic voyage through the shallow and icy waters of the Northern Dvina.
Read in Russian | Читать по-русски
By

It was with great thrill that ship pilots on 6th March escorted the 33 thousand ton deadweight vessel from the White Sea, up the Northern Dvina River and to the port of Ekonomiya.

Never before has a ship of this proportions sailed on the river that leads to Arkhangelsk, the northern Russian city. The vessel successfully moored in the port terminal located about 25 km from the city center, port authority Rosmorport informs.

The «Sevmorput» has a draft of 11,8 meters when fully loaded. That is normally too much for the Northern Dvina that until now has allowed for shipping only with 9,2 meter draft ships.

«You can call this port call a historic event for Arkhangelsk,» says Lev Levit, a representative of the  Arkhangelsk regional government. It opens the way for a boost in goods traffic to the the city, the government official argues.

Arkhangelsk has a strategically important sea port. But the shallow waters of the Dvina is a major limitation for the shipping industry and goods volumes are far smaller than in neighboring Murmansk.

The nuclear-powered ship was escorted by several vessels on its way up the river. The icebreaker «Dikson» opened a 18,8 nautical miles lane through the ice and the «Kapitan Chadaev» opened the ice in the area around the Ekonomiya terminal, port authority Rosmorport informs.

The «Sevmorput» is the world’s only nuclear-powered container ship. It departed for the Atomflot base in Murmansk in early March and will in in the middle of the month proceed to the Gydan Peninsula with a 17,000 ton heavy shipment to Novatek’s new Arctic LNG 2 project.

The ship was built in the period 1984-1988. In 1992-2006 she was used for transportation to ports along the Northern Sea Route. Later she was docked at the Atomflot base in Murmansk for years without assignments, and Rosatom was preparing to turn the ship into scrap metal.

In 2013 it was announced that “Sevmorput” would be renovated and put into service again. In early 2016, the ship underwent sailing tests in the Barents Sea.