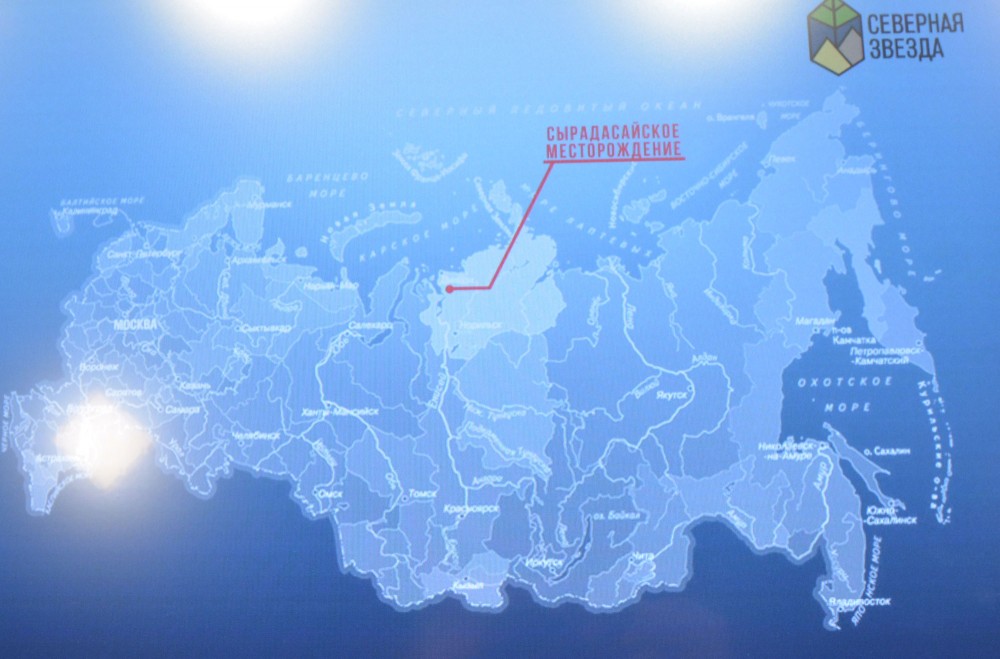 Roman Trotsenko and his Severnaya Zvezda owns licenses to major coal resources in the Taymyr Peninsula. Photo of project presentation by Atle Staalesen

Roman Trotsenko is ready to invest large sums in the opening of a far northern coal mine and the building of a new major seaport on the Barents Sea coast.
Read in Russian | Читать по-русски
By

The owner of investment company AEON and Russia’s 59th richest person makes clear he is up for a comprehensive Arctic engagement.

Roman Trotsenko is mostly known from real estate development, transportation and the fertilizers industry. Now, the well-connected businessman makes clear that he is ready to spend several billion dollars of his wealth on Arctic mining and infrastructure projects.

It is all connected with coal.

Subsidiary company Severnaya Zvezda owns the license to the large Syradasayskoye coal field in Taymyr and Trotsenko intends to send millions of tons out from a new port terminal located near Dikson on the Kara Sea coast.

Reserves are estimated to 5,7 billion tons and annual production is to reach at least 10 million tons. Production start is set to 2020.

The Syradasayskoye field is located about 120 km from the coast of the Kara Sea, not far from the license areas of Vostok Coal.

Despite a law suit from Russian environmental authorities, Vostok Coal is now in the process of developing the first of its more than 50 coal licenses in the area. The two companies are due to cooperate about the development of two new port terminals for coal shipments.

Trotsenko and the Severnaya Zvezda intend to invest at least 35 billion rubles in the Taymyr coal project. And support from the federal government is solid.

The project that is formally branded as the West-Taymyr Industrial Cluster is included in a list of regional priority projects adopted by Prime Minister in late March this year.

On the list, which has a total of 32 projects, are also the development of a sea port and terminal in Chaika on the west coast of the Taymyr Peninsula, as well as the development of the Payakha oil field in the Yenisey river delta.

Judging from presentation materials made available in the recent Arctic Forum in St. Petersburg, Trotsenko’s project includes also a coal power plant, a processing facility and an airport. In addition, on the table is the building of a 60 km long covered conveyer belt to a new port terminal.

During the Forum in St. Petersburg, Roman Trotsenko said that he is ready to spend 200 billion rubles on his Arctic projects.

The other major Arctic project of Trotsenko is the building of a port terminal in Indiga, the cape stretching out into the Barents Sea from the Nenets coast.

On this site, Trotsenko and his companies intend to develop a terminal that can handle up to 100 million tons of goods per year. The prime commodity will be coal from the Kusbass area south in Russia, and the project includes the building of a railway line that is to connect with the federal rail grid.

Needed investments in the Indiga port amount to $2 billion, the company says. In addition comes an estimated 300 billion rubles for the railway line.

Negotiations with the Russian Railways are in the process, the project developers confirm to Forbes.

A Memorandum of Understanding with regional Nenets authorities was signd in April this year. In a comment, Trotsenko highlights the projected terminal’s importance for Russian Arctic development, trade and exports to the Asian-Pacific region.

«Indiga is located in a unique position and we are confident that the development of the port project will allow us to cut the distance of the Northern Sea Route practically by a third, and significantly speed up the transportation of goods and reduce the costs for delivered to end destinations,» Trotsenko underlined following a signing ceremony with Nenets Governor Aleksandr Tsybulsky, the regional government informs.

The site for the projected new terminal is located in the eastern part of the Barents Sea. Waters in the area do not freeze to the same extents as further east in the Pechora Sea and Kara Sea, and water depths are sufficient for large-size tankers.

Roman Trotsenko is well-connected with powerful people in both government and state companies. In 2009, he took over the reigns of the United Shipbuilding Corporation, a leading state shipbuilding company.

In 2012, he was appointed adviser to Igor Sechin, President of Russia’s biggest oil company Rosneft. Trotsenko reportedly especially advised Sechin on issues related to the company’s activities on the shelf.