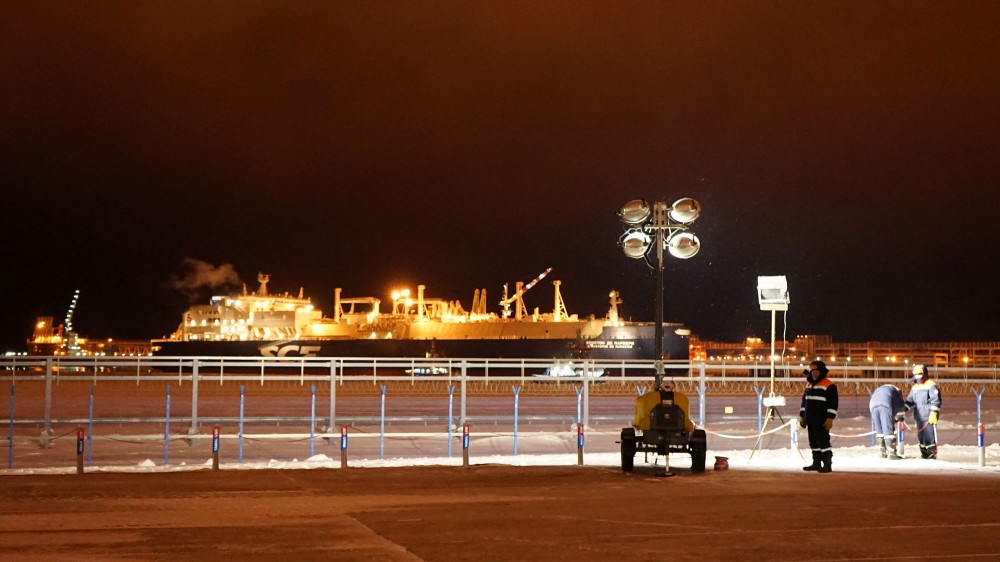 The sailing of LNG tanker Christophe de Margerie across the Russian Arctic seaway in mid January shows that shipping on the route can be extended through most of winter, the Russian Transport Minister says.
Read in Russian | Читать по-русски
By

The powerful icebreaking carrier on the 16th January made it through the Chukchi Sea and into the Bering Strait after more than ten days in thick sea-ice.

Never before has this voyage been conducted at this time of year.

“It is a historical day for the development of the Northern Sea Route and national shipping,” Transport Minister Vitaly Savelev underlines. He argues that the voyage shows that shipping on the route can be extended with 1-2 month per year, and that it is “a step towards year-round commercial shipments on the route.”

Captain Sergey Gen on the Christophe de Margerie on the 18th January reported to Minister Savelev in a video call. The voyage from the LNG terminal of Sabetta in Yamal to the Bering Strait took a total of 10 days and 21 hours, he informed.

The distance was 2474 nautical miles, of which about 65 percent was sailed astern (backwards). The average speed was 9,5 knots and there was no need for external icebreaking assistance, Captain Gen said.

The Christophe de Margerie had set out from Sabetta on the 5th of January. The destination was the Chinese port of Dalian.

The vessel that is owned and operated by Sovcomflot was however not completely alone. Only a day later did the Nikolay Yevgenov depart from the same LNG terminal. It followed in the wake of the Christophe de Margerie all the way and made it into the Bering Strait on the 17th January.

At the same time did the Nikolay Zubov sail in the opposite direction, from Dalian towards Sabetta. The vessel arrived in the Yamal terminal on the 16th January.

All the carriers are part of the fleet of 15 vessels that serve the Yamal LNG project. They can all carry up to 70,000 tons of liquified nature gas, and all have ice class Arc7, which enables them to autonomously break through up to 2,1 meters of sea ice.