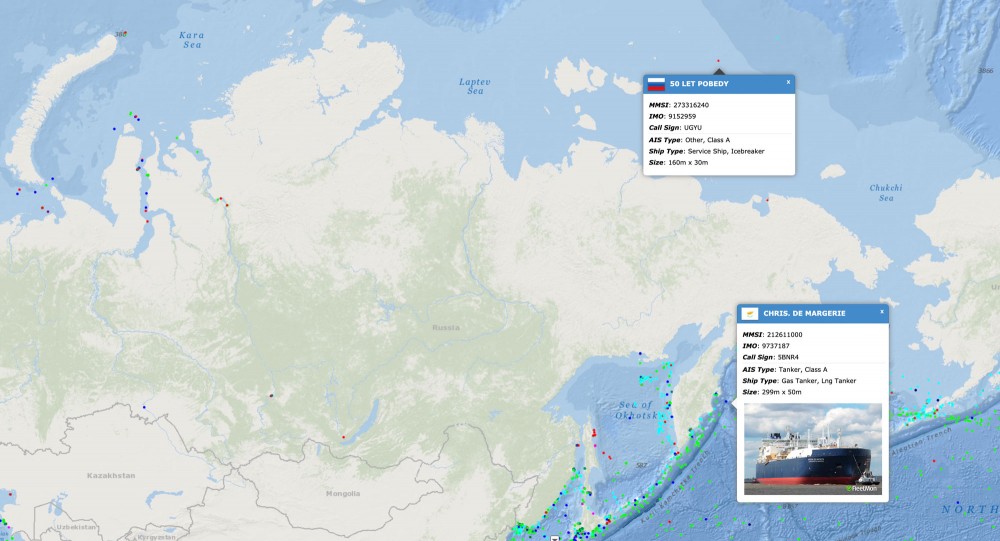 LNG carrier Christophe de Margerie is on its way from China to Sabetta, while nuclear-powered icebreaker is in the East Siberian Sea. The two vessels might ultimately sail together across the Northern Sea Route. Map compilation by Barents Observer

The Christophe de Margerie is approaching the Bering Strait on a historical voyage across the icy waters of the Russian Arctic shipping route.
Read in Russian | Читать по-русски
By

Never before has a commercial ship crossed the Northern Sea Route in February.

The 299 meter long carrier operated by Sovcomflot was on the 3rd of February located off the coast of Kamchatka. The powerful ship has a northbound course and is due to arrive in Sabetta, the LNG terminal in Yamal, on the 17th of February.

The tanker set out from the Chinese port of Yangkou on the 27th January, data from ship traffic service MarineTraffic shows.

At the same time, nuclear-powered icebreaker 50 Let Pobedy was on early Tuesday sailing eastwards towards the East Siberian Sea. The two ships might ultimately meet near the Bering Strait, and the tanker subsequently escorted westwards through the thick sea-ice.

The whole Northern Sea Route is now covered by ice. The straits between the mainland and archipelagos Severnaya Zemlya and New Siberian Islands are covered by thick fast ice, while the remaining part of the area has one-year old sea-ice that is between 30-200 cm thick.

There is no multi-year old ice in the area.

Air temperatures in the region can in this time of year drop to below minus 40C°.

It is not the first record-breaking voyage of the Christophe de Margerie. The ice-breaking tanker was the first LNG carrier that crossed the route. In May 2020, Sovcomflot sent the carrier across the route in a record-early voyage, more than a month earlier than the previous record.

In January this year, the tanker took part in another historical voyage, where two commercial carriers crossed each others’ paths in one of the most icy parts of the Arctic sea route in January.

The operations are part of a series on experimental shipments on the remote and icy shipping route. In July last year, Sergey Frank, board chairman of shipping company Sovcomflot, made clear that ice-class tankers will be sailing on the Northern Sea Route in January and February.

The experiments are conducted in cooperation with natural gas producer Novatek and nuclear power company Rosatom, Frank said. It is part of a bid to show that the route can be used also in winter time. According to ship operators, the NSR can soon be used for sailing up to 10 months of the year.

The Christophe de Margerie is part of a fleet of 15 vessels that serve the Yamal LNG project. They can carry up to 70,000 tons of liquified nature gas, and all have ice class Arc7, that enables them to autonomously break through up to 2,1 meters of sea ice.

The fleet of LNG carriers are instrumental in the major spike in shipping in the Russian Arctic. In 2020, more than 32 million tons of goods was shipped on the Northern Sea Route, up from 2019 when the volume amounted to 31,5 million tons.