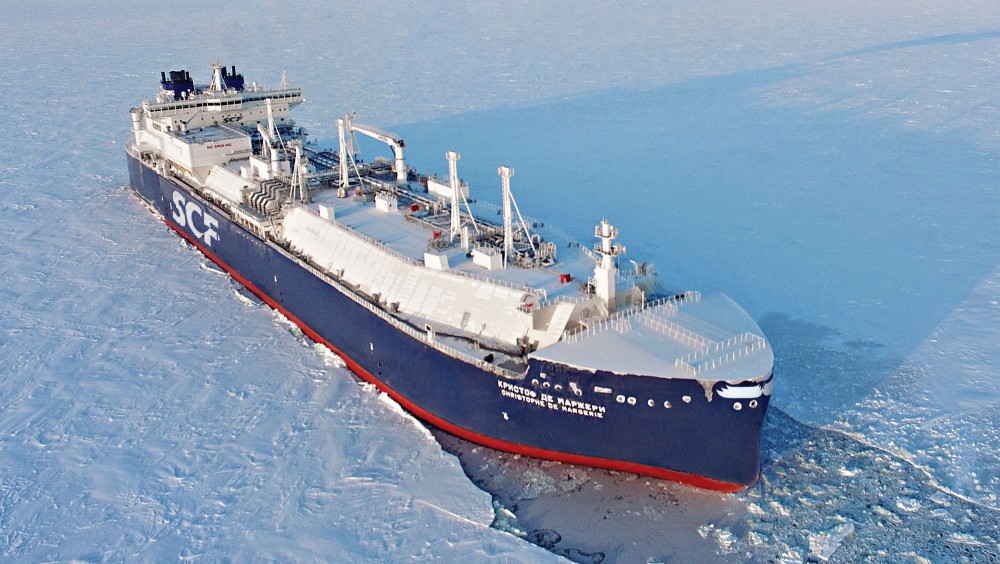 The "Christophe de Margerie" is part convoy that now is on its way from Sabetta to Jingtang, China. Photo: Sovcomflot

This year's first eastbound shipment of LNG on the Northern Sea Route comes more than a month earlier than previous years.
Read in Russian | Читать по-русски
By

In the convoy that this week set out from Sabetta, the LNG terminal in Yamal, are LNG tanker “Christophe de Margerie” and icebreaker “Yamal”.

It is the first voyage across the Northern Sea Route this year. The LNG tanker set out from Sabetta on the 18th of May and subsequently teamed up with the nuclear-powered icebreaker.

By the 19th May, the convoy had made it to the waters north of Dikson, data from ship tracker MarineTraffic show.

It is the earliest voyage of its kind ever. In 2019, the first eastbound convoy with an LNG carrier started on the 29th June and in 2018 the first voyage set out from Sabetta on the 25th June.

The shipload of LNG are destined to Jingtang, China, and arrival is due the 11th June.

Ice conditions in the region are complicated with an up to two meter thick white sheet across major parts of Russian east Arctic waters. A solid ice sheet is covering the Vilkitsky Strait, as well as the waters south of the New Siberian Islands, ice maps from the Russian Arctic and Antarctic Research Institute show.

Ice melting across the Arctic has this spring proceeded at a pace near average. At the same time, sea ice extent across the region ranked fourth lowest in the satellite record, the National Snow and Ice Data Center informs.

Like previous years, the Russian Arctic saw average air temperatures far beyond normal. The offshore areas north of Siberia were up to 8 degrees Celsius warmer than normal.

The tanker is owned and operated by Sovcomflot and carry up to 70,000 tons of liquified nature gas. It is part of a fleet of 15 vessels that serve the Yamal LNG project. They all have ice class Arc7 and can autonomously break through up to 2,1 meters of sea ice.

The fleet of LNG carriers are instrumental in the major spike in shipping in the Russian Arctic. In 2019, a total of 31,5 million tons of goods were shipped on the Northern Sea Route, an increase of almost 60 percent from the previous year.

Despite the COVID-19 crisis and decline in international oil and gas demands, shipping on the route continued to grow early 2020. Shipments were up 4,5 percent in the first quarter of the year.

Notification: this story has been updated. It first mentioned a total of four vessels in the convoy. According to updated information, there are only two ships included, the “Christophe de Margerie” and “Yamal”