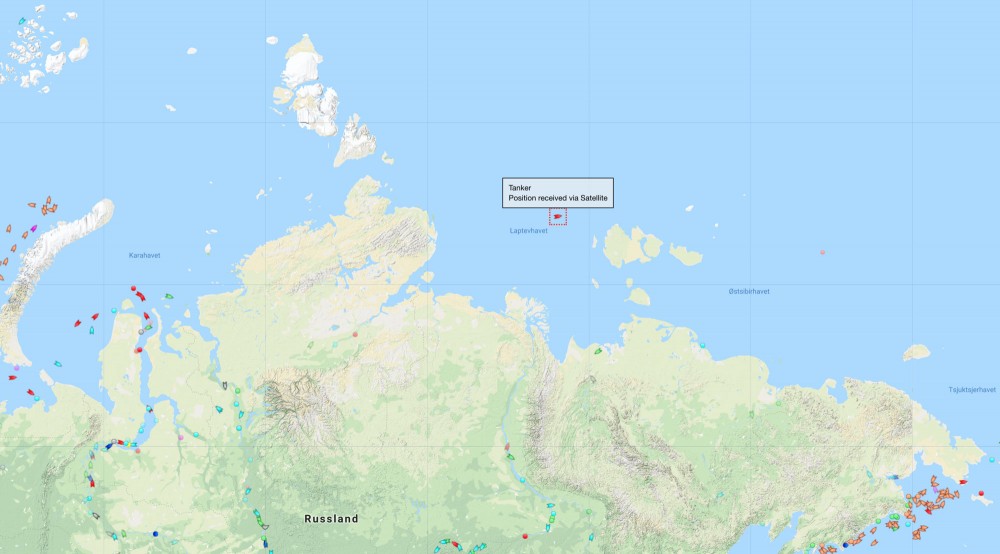 The «Vladimir Rusanov» is breaking its way from Sabetta to Korea through Russia’s Arctic route.
Read in Russian | Читать по-русски
By

The ship left Sabetta, the LNG terminal in the Yamal Peninsula, on 29th of June and is expected to arrive in Okpo, Korea, on July 15th. On board is up to 70,000 tons of liquified natural gas.

The ship was on 2nd July on its way across the Laptev Sea with a route north of the New Siberian Islands.

Ice conditions in the area are highly difficult with up to two meter thick ice along significant parts of the route. Data from the Russian Arctic and Antarctic Research Institute show that the northern parts of the Kara Sea and the the Laptev Sea still have significant volumes of ice.

The conditions appear most complicated in the East Siberian Sea where there by 25th of June was not a single opening in the ice.

The shallow waters between the Siberian mainland and the New Siberian Islands still has fast ice, the solid ice cover normally covering coastal parts of the area.

It is not the first time that the «Vladimir Rusanov» is breaking its way across the Arctic route. Also in 2018, the ship was the first to make it through the Northern Sea Route. Then, the voyage started from Sabetta on the 25th June, four days earlier than this year.

The LNG carrier is owned jointly by Japanse company Mitsui and the China COSCO Shipping Corporation Limited. It came into service in March 2018. Like the rest of the fleet of new icebreaking tankers, the ship has ice-class Arc7 which means that it can break through up to 2 meter thick ice.

For Mitsui, the shipment illustrates the company’s stronger engagement in Arctic developments. Earlier this week, company President and CEO Tatsuo Yasunaga signed a historical agreement with Russia’s Novatek over the joint development of the Arctic LNG 2, a huge natural gas project in the region. The Japanese company is also a stakeholder in the planned building of an LNG transshipment terminal and marketing complex in the Kamchatka area.

Novatek, the company which is operating the Yamal LNG plant, at the moment has five LNG carriers at its disposal. That number will gradually increase to 15. They all have top-class ice protection Arc7. The will over a big number of year shuttle to and from Sabetta, the new terminal on the Yamal coast.