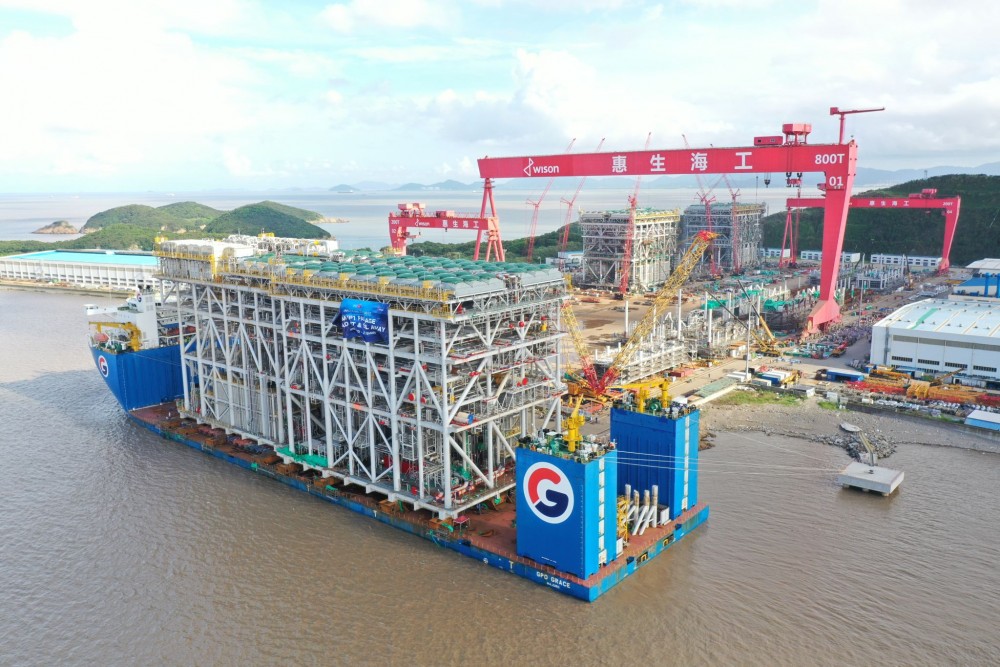 The "GPO Grace" departed the Wison Offshore & Marine yard in China on August 19 and is now sailing towards Murmansk via the Northern Sea Route. Photo: GPO Heavylift

Russia’s offshore Arctic industrialization is in full swing. The nearly 50,000 tons first train module for the Arctic LNG 2 project has expected arrival in Murmansk on September 16.
Read in Russian | Читать по-русски
By

The module is built at Wison Offshore & Marine’s Zhoushan yard in China and is now under shipping towards Novatek’s Kola yard in Belokamenka north of Murmansk. Here, the giant model will be mounted to a large gravity-based structure before final towing to the coast of far northern Gydan Peninsula in Ob Bay in Siberia.

The facility will be Novatek’s first train for Arctic liquid natural gas (LNG) 2 plant. Production at Train 1 is scheduled for 2023. A year later, in 2024, Train 2 will start production, while the final Train 3 is set to start operation in 2025.

Each of the three trains will have a production capacity of 6,6 million tons per year, according to Novatek.

The company is Russia’s largest privately-owned natural gas company and is today operating the Yamal LNG plant in Sabetta. Unlike Yamal LNG, the Arctic LNG 2 will entirely be based on a floating production concept.

It is the Norwegian GPO Heavylift’s vessel “GPO Grace” that brings the LNG production plant from China to Murmansk in what is one of the largest structures ever transported via the Arctic shipping lane. On September 2, the vessel sailed northbound outside the Kamchatka Peninsula, according to AIS data. Estimated arrival at the Kola yard in Belokamenka is September 16.

The “GPO Grace”, though, isn’t the only giant open-deck transport vessel to sail the Northern Sea Route this September. Currently, the “Biglift Barentsz” sails west in the East Siberian Sea with an estimated arrival to Gydan in the Ob bay on September 10. The ship brings infrastructure facilities to the ongoing preparation for Arctic LNG 2. Construction of pipelines, pump stations, housing, an airport, and port facilities are in full swing. According to online ship-tracking service MarineTraffic.com, there are currently more than 40 vessels near the location on the eastern shores of the Ob bay

August, September, and October are the busiest months for shipping of construction materials to the area, as the Ob bay and waters in the Kara Sea are mostly ice-free.

The Arctic LNG 2 will process gas from Utrenneye field on the Gydan Peninsula in the Yamalo-Nenets Autonomous Okrug.

When the investment decision for the project was made in September 2019, the total costs for bringing the Arctic LNG 2 to full capacity were estimated at $21,3 billion.

Like the LNG produced at the Sabetta plant, the Arctic LNG 2 will ship the gas to markets both in Asia and Europe. A large fleet of ice-classed LNG tankers will sail east and west, and two reloading facilities are to be established, in Ura Guba on the Kola Peninsula for European shipping and another at Kamchatka for the Asian market.