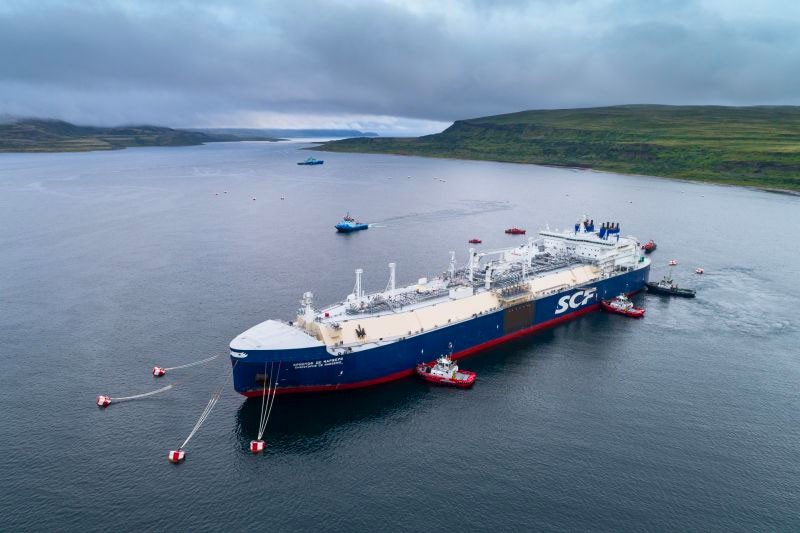 Ship-to-ship reloading of LNG near island of Kildin will come to end when a new permanent terminal opens in Ura Guba, presumably in 2023. Photo: Rosmorport

The French company acquires 10 percent of Arkticheskaya Perevalka, the subsidiary company of Novatek that will operate a natural gas reloading facility on the Barents Sea coast.
Read in Russian | Читать по-русски
By

Novatek now confirms that Total is buying 10 percent of the company that will operate the terminal in the Murmansk region. Arkticheskaya Perevalka will also operate a similar facility in Kamchatka on Russia’s Pacific coast.

The terminals will be floating facilities that can hold up to 360,000 tons of LNG each and simultaneously serve two LNG tankers. When ready, ice-class carriers will shuttle between the terminals and LNG plants in the Yamal and Gydan Peninsulas.

The new logistical scheme will cut costs and provide efficient transportation of liquified natural gas from the Arctic LNG 2, as well as other projects in the Arctic, Novatek informs.

The terminals will have a capacity to handle about 20 million tons per year and are due to be ready for operations in 2023.

Total has long been in talks with Novatek about a stake in the reloading terminals. Novatek leader Leonid Mikhelson in early 2019 made clear that the Frenchmen were “interested in the operatorship of the terminal.”

«Actually we do not need partners up there [in Ura Bay], but we will still definitely hire an operator,» Mikhelson told news agency RIA Novosti during the World Economic Forum in Davos.

«Perhaps, Total, which is our permanent partner, after all they want it [and] if their interest persists, then we will consent in order to let the company be part of the process and have a transparent circuit.»

According to Mikhelson, several more companies have interested in the two planned LNG terminals, the one in the Kola Peninsula and the one in Kamchatka, far east Russia.

The development of the terminal in Ura Guba is considered highly tricky as the projected site is located only few kilometers from closed military town Vidyaevo and a local Northern Fleet submarine base. The project was discussed in a high-level meeting with participation of government ministers, military leaders and company chiefs in August 2018.

Vidyaevo is located about 50 km to the northwest of Murmansk, not far from the border to Norway. It has a deep and year-round ice-free fjord, and is considered among the most favorable spots for shipping and logistics on the Kola Peninsula.