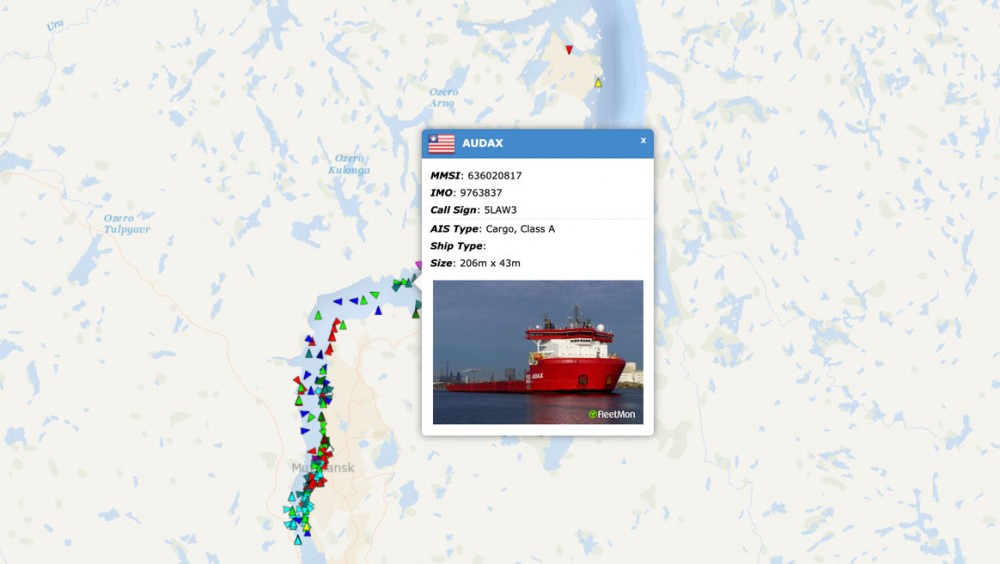 The "Audax" deliveres cargo at Belokamenka 25th of May 2022. Screenshot from ship traffic data service

It might have been the last major delivery of western technology at Belokamenka. The EU’s 5th sanctions package adopted by the EU Council on the 8th of May prohibits shipments to Russia of several key kinds of technology. Included in the ban are heat-exchanging units, a key component in LNG plants.

The ban includes also equipment that already has been contracted and paid for. Western manufacturers would have to ship goods contracted before 26th of February to Russia no later than 27th of May.

The Audax moored at the major construction site on the Kola Bay on the 25th of May, just two days before the final time limit.

It is not clear what kind of equipment that was delivered by the Audax. But it might have been another module for one of the three gravity-based platforms that are under construction on site. The heavy loads vessel has several times previously delivered LNG modules at Belokamenka, including in mid-winter 2022.

Red Box Energy Services, the Dutch company that owns the Audax, has not responded to questions from the Barents Observer.

It is the world’s first facility for “mass production” of natural gas liquefaction trains on gravity-based structures, Novatek says. Three structures of the kind are under construction, each with a production capacity of 6,6 million tons of LNG per year. They will all serve the company’s next major natural natural gas project, the Arctic LNG 2.

However, Novatek might ultimately be able to complete only one of the projected three structures. Reportedly, Novatek already in late April halted construction at project train number 3 while number 2 will be halted in late May.

Project train #1 has received all 14 modules needed, and is now believed to be about 85 percent completed. When ready, the structure will be towed through the Barents Sea, Kara Sea and up the Gulf of Ob to the production site in the Gydan Peninsula.

The modules are built in China. However, also Chinese manufacturers are now pulling out. According to Upstream, the Chinese yards that manufactures the topside modules have decided to halt cooperation with the Arctic LNG 2.

Production of LNG was originally due to start in 2023. But time schedules are now in flux.

Company CEO Leonid Mikhelson himself admits that operations are getting “complicated”.