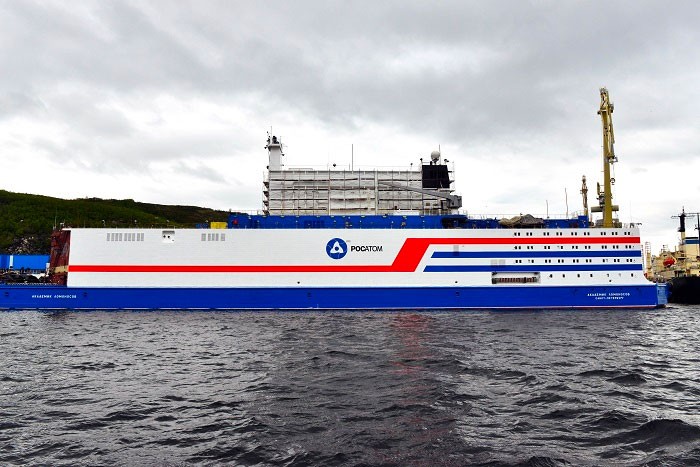 Russia's first floating NPP is due to start its major Arctic voyage from Murmansk to Pevek in August this year. Photo: Rosatom

The «Akademik Lomonosov» has been officially handed over to the Russian state nuclear power company.
Read in Russian | Читать по-русски
By

The construction and testing of Russia’s first power plant of the kind is declared completed as the installation on Thursday morning was officially handed over from Baltic Yard to Rosatom. In a ceremony, representatives of the two state companies signed the acceptance certificate, the document that states that the «Akademik Lomonosov» has undergone all necessary testing and that it has successfully met requirements.

We are now starting the active preparations for transportation of the floating power plant to the site of its permanent location - to the town of Pevek, he added.

The installation will be towed from Murmansk to the far eastern Arctic town in August. Representatives of the Baltic Yard will take part in the operation and also assist in the connection of the plant to coastal facilities in Pevek, representatives of the yard confirm.

The Baltic Yard says that it has guarantee responsibilities for the plant until mid-2021.

According to Rosatom, the «Akademik Lomonosov» will be «a key element in the infrastructure developed as part of plans for the Northern Sea Route.»

It is planned to provide both electricity and heat to the people of Pevek and ultimately replace the generating capacities of the local Chaunsky heat power plant and the Bilibinsky Nuclear Power Plant.

The floating power plant will prepare the ground for social and economic development in the region, the state nuclear power company argues.

As previously reported, the «Akademik Lomonosov» in late June obtained a 10 year operation license for its two reactors. The license was granted by Rostechnadzor, Russia’s Federal Environmental, Industrial and Nuclear Supervision Service.

The plant, which is built in St. Petersburg, was towed around Scandinavia last summer and the first uranium fuel elements were loaded into the reactors in July last year. The first of the two reactors was started in November and in late April, the power-plant was successfully tested to 100% capacity.