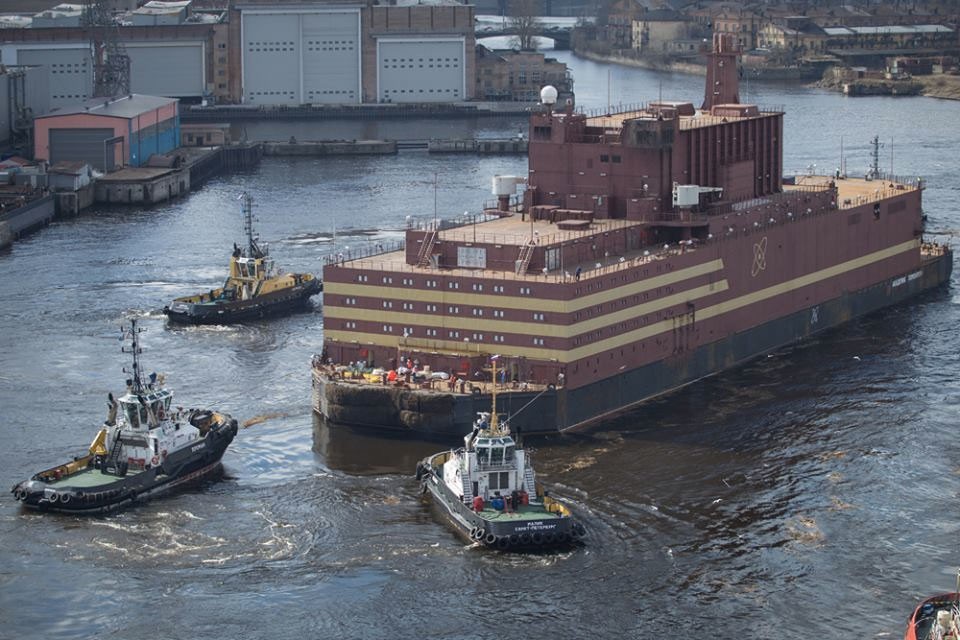 "Akademik Lomonosov" on its way out of the Baltic Yard in St.Petersburg. Photo: Rosatom

The controversial Russian installation will spend the next two weeks along the Norwegian coast.
Read in Russian | Читать по-русски
By

The «Akademik Lomonosov» is followed with a close eye by Nordic authorities as it is towed across the Baltic Sea, through the Danish straits and into Norwegian waters. Three support ships are involved in the unique operation which started in St. Petersburg on the 28th April.

By late 3rd May, the floating installation had made it south of Sjælland, the Danish island, with course for the straits of Storebælt, data from Marine Traffic show. It is likely to enter Norwegian waters in the course of Friday or Saturday this week.

The towing has a speed of up to 4,5 knots, state nuclear power company Rosatom informs.

The «Akademik Lomonosov» can itself not be tracked by GPS. But so can the tugs and support vessels «Spasatel Karaev»,«Umka» and «Yasnyy».

The power plant is not charged with nuclear fuel and the voyage towards Murmansk is considered without any major environmental risk. But the «Akademik Lomonosov» is a highly controversial project and perceived by neighbouring countries with a high level of skepticism.

Director for Maritime Safety in the Norwegian Coastal Administration Arve Dimmen confirms to the Barents Observer that the voyage is kept a close eye on by Norwegian authorities.

«This is the first time that such a facility is being towed along the coast of Norway, and the Coastal Administration will follow it closely,» he underlines in an email.

«The Coastal Administration’s surveillance aircraft will follow the vessels and Norwegian support ships will be stationed along the route to be able to mobilise on short notice,» he makes clear.

Dimmen confirms that normal procedures will apply if the floating power plant would need shelter because of bad weather or an emergency situation. It will be the Vardø Traffic Center which will provide the «Akademik Lomonosov» with guidance in such a situation, Dimmen makes clear.

He says that the Russians have informed that there are no people on board the installation during the towing.

Also environmental groups are having their eyes on the «Akademik Lomonosov». Greenpeace vessel «Beluga-II» is sailing just few hundred meters away from the Russian ships.

Speaking from aboard the “Beluga II”, Jan Haverkamp, a nuclear expert for Greenpeace Central and Eastern Europe, said:

«This power plant basically moves the threat of a nuclear catastrophe into fragile Arctic waters. With its flat-bottomed hull and lack of self-propulsion it’s like balancing a nuclear power plant on a wooden palette and setting it adrift in some of the world’s roughest waters.»

Russia’s nuclear power company Rosatom originally wanted to load nuclear fuel on board the power plant ahead of its towing to Murmansk. However, after strong reactions from the Nordic countries, Rosatom decided to postpone the loading until the vessel’s arrival to Murmansk.

It was former Norwegian Foreign Minister Børge Brende who i june 2017 announced that he had successfully managed to persuade the Russians to postpone the instalment of the fuel.

The towing is expected to last about three weeks. In Murmansk, the «Akademik Lomonosov» will be moored at the Atomflot base, along with icebreakers and other nuclear-powered vessels.  After a year of testing, the power plant will be towed along the whole Russian Arctic coast to Pevek where it will be permanently based.

According to Rosatom, it is the State Marine Rescue Service which is responsible for the towing operations, both from St. Petersburg to Murmansk and from Murmansk to Pevek. Loading of nuclear fuel is planned to take place in the course of fall this year. After testing in the Kola Bay, the installation is to be towed to Pevek in the course of June 2019.

The «Akademik Lomonosov» has been under construction for more than 12 years. The building originally started at the Sevmash yard in Severodvinsk back in 2006. Then, the hull was moved to the Baltic Shipyard in St. Petersburg in 2009 because the yard by the White Sea had to concentrate on building warships and submarines. In 2011, the floating nuclear power plant became central in the bankruptcy proceedings against the Baltic Shipyard.