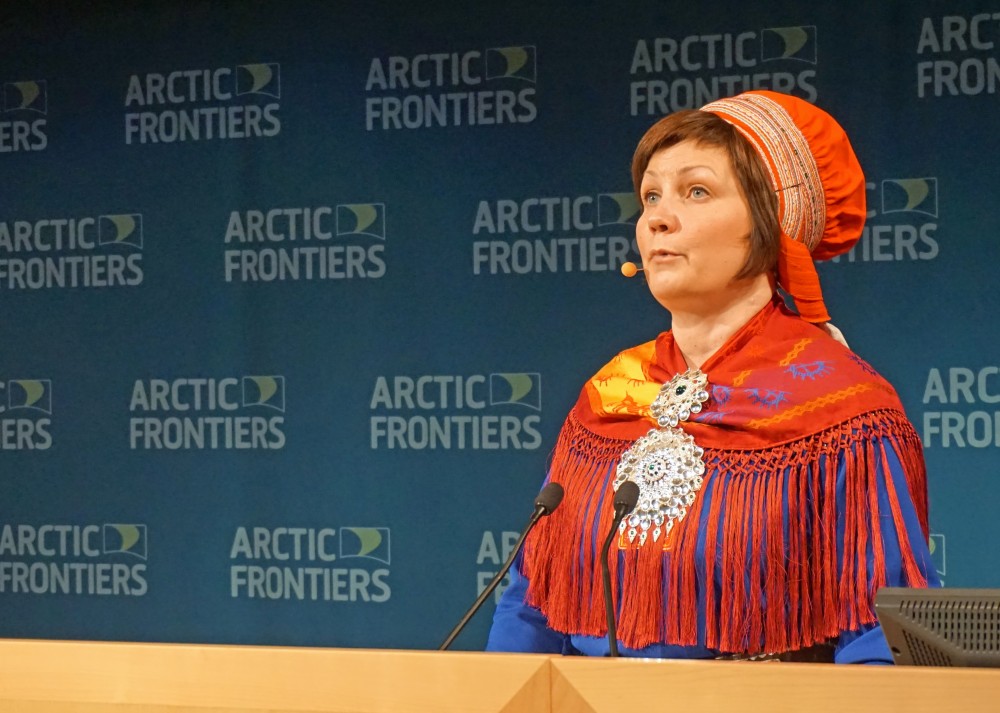 “We need a kind of leadership. Norway needs leaders that can inspire developments based on sustainability,” Aili Keskitalo said in her remarks to the Arctic Frontiers conference. Photo: Thomas Nilsen

“History tells us its not enough to trust that those taking decisions will take the right decisions,” President of the Sami Parliament Aili Keskitalo says.
By

“Welcome to Sapmi, Sameland [the land of the Sami], said Aili Keskitalo and soon attracted attention to the fact that the traditional areas for the Sami people are shrinking.

The Sami people have lived on those lands for centuries, along the coasts and in the inland as reindeer herders, farmers, hunters and fishermen.

“We the indigenous peoples must participate when decisions impacting our regions are taken. We need to have a key role,” Keskitalo said.

She continued: “Indigenous peoples must be considered as part of the solution, not as part of the problem when natural resources are to be developed.”

Aili Keskitalo is not afraid of direct speaking. In her New Year’s speech, the Sami Parliament President criticized the Norwegian Government for recently giving permission to dump mining tailings into the Repparfjord in Finnmark.

“Our grandchildren will not understand that we with great passion sorted our garbage from households, but chose to dump poisoning waste into the fjords where we catch our food.”

All ministers entering the pulpit in the auditorium at Tromsø University on Monday copied Keskitalo’s introductory remarks in front of the participants from some 30 countries interested in Arctic issues. Both Foreign Minister Børge Brende of Norway and Finland’s Foreign Minister Timo Soini underlined the need for environmental protection as economic developments move further and further north.

“Sustainable development” was by far the most mentioned phrase at the Arctic Frontiers conference.