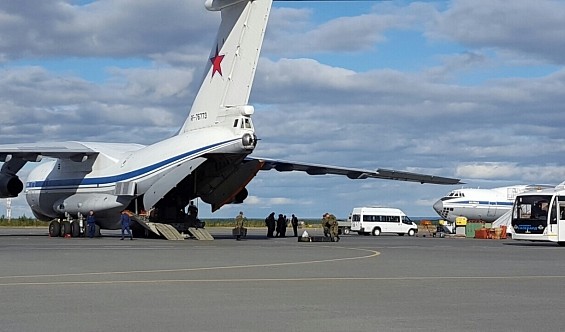 A military group of specialists for dealing with chemical, radioactive and biological protection arrives at the airport in Salekhard. Photo: Russia's Ministry of Defence.

So far, 40 people are hospitalized, among them several children that are under intensive care at the regional health centre in Salekhard. The people are Nenets reindeer herders from the outbreak area on Russia’s Yamal Peninsula.

The Defence Ministry reports that a special emergency task force unit on Saturday was sent from the Central Military District’s base in Ekaterinburg to Salekhard with 30 tons of biologically active agents aimed at decontamination of infected areas.

Chief of the Army’s Sanitary Inspection, Pavel Davydov, says to Vesti Yamal that the vaccine in use is approved for use by the Russian Armed Forces for prevention of anthrax and has repeatedly shown its effectiveness in outbreak of epidemic disease.

“Its effectiveness is 95 percent,” Davydov says.

The Army’s Il-76 airplane with military specialists from the corps dealing with chemical, radioactive and biological protection also brought a laboratory to help test people, the ground and animals.

The arriving military Il-76aircraft. Film by regional TV from YouTube.

“Reconnaissance will be carried out from the air to determine the boundaries of the area where to take actions, arrange for field camps and direct routes for ground forces,” a press note from the Defence Ministry reads.

In total, 200 specialists are now working on the tundra to eliminate the the outbreak, Vesti Yamal reports. A major task will be to dispose the large number of dead reindeers.

1,200 reindeer are so far found dead, making the anthrax outbreak the largest in the country since the 1979 Sverdlovsk incident when spores of the bacteria allegedly accidentally leaked from a military laboratory.

The current outbreak on the Siberia tundra could be linked to thawing reindeer carcasses. A heat wave has led to record-high temperatures up to 35 degrees Celsius across the Yamal tundra this July causes melting of the permafrost in the area. The anthrax bacteria can persist in soil for more than 70 years.

Russia’s Ministry of Health is closly following the situation on the Yamal Peninsula.