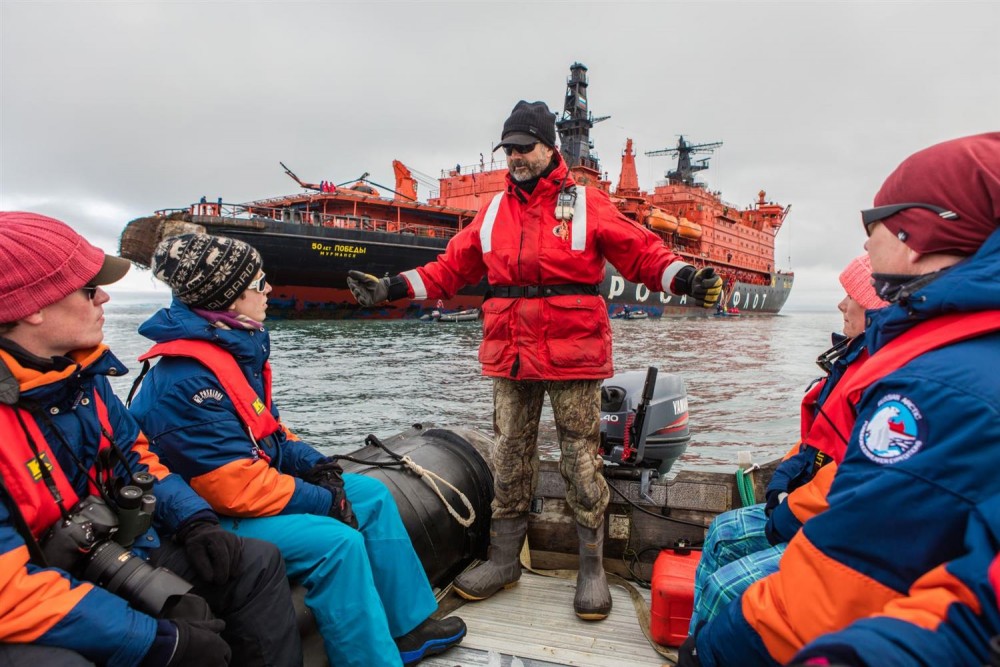 Almost 30 percent of the visitors to Russian archipelagos of Novaya Zemlya and Franz Josef Land are from the the People’s Republic of China.
Read in Russian | Читать по-русски
By

A total of 954 tourists, of which 269 were Chinese, this year visited the Russian Arctic national park, the park administration informs. The protected area includes the Franz Josef Land and the northern parts of Novaya Zemlya. Most of the tourists were taken to the area by Russian icebreaker «50 Let Pobedy».

Nationals from a total of 41 countries this year visited the remote Russian Arctic area, of which 11 were Asian. Germans account for the second biggest number of visitors, data from the park shows.

Only about 5,5 percent of the tourists were Russian.

The «50 Let Pobedy» this year conducted five voyages to the area on the route Murmansk-North Pole-Murmansk, while the vessel «Sea Spirit» twice sailed from Svalbard, the Norwegian archipelago. The diesel-engined icebreaker «Kapitan Khlebnikov» and the vessel «Hanseatic» each once visited the area during their voyages across the Northern Sea Route.

The number of tourist visiting the national park was higher in 2015 when the number of visitors amounted to 1225. The number is expected to remain on the same level in 2017, when «50 Let Pobedy» is due to make five voyages, the «Sea Spirit» - two voyages and the «Akademik Shokalsky» - two.

According to park inspector Aleksandr Feldt, there was far less ice in the waters around Franz Josef land this year compared with 2015. «For ship navigation, this is of course better», he says on the website of the national park.

«However, consequently it was not possible [for the tourists] to see seals and polar bears before we had crossed the 82nd parallel. In other words, further north than normal».

The Russian Arctic national park was this year extended as the whole Franz Josef Land was included in the protected area. The national park now covers an area of 8,8 million hectares.