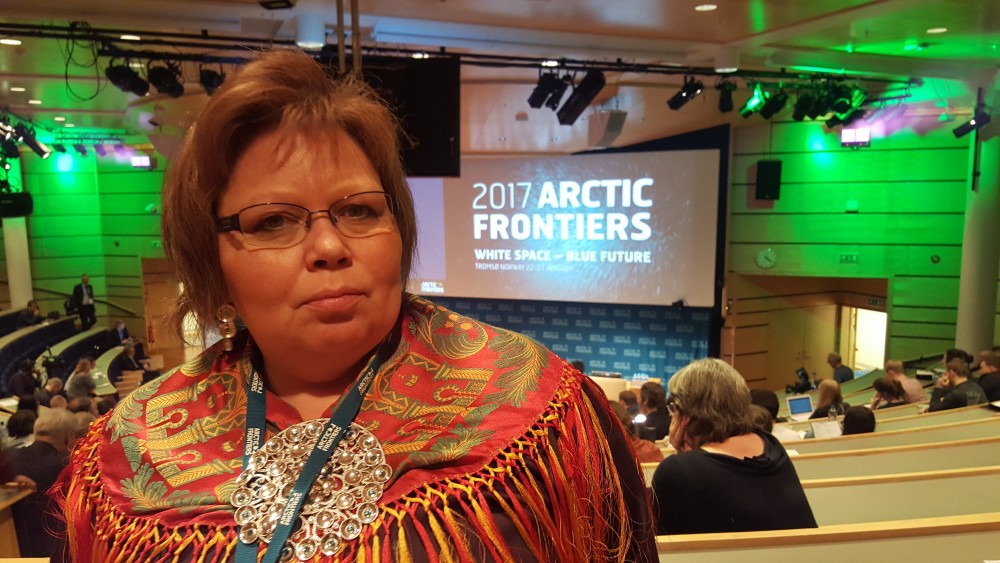 “Maybe it is because we are not always focused on short-term gain, but the future for our people,” says President of the Norwegian Sami Parliament Vibeke Larsen.
Read in Russian | Читать по-русски
By

“We feel downgraded. We are in the Arctic and we are peoples of the Arctic. They should have included us on the list of speakers as they have done before,” says President Vibeke Larsen.

Arctic Frontiers – Norway’s largest gathering on Arctic affairs - started in Tromsø on Monday. Opening remarks were delivered the same procedure as last year and the years before that, but this year without the President of the Sami Parliament on the shortlist.

“I think we could interpret this as downgrading indigenous peoples. Looks like we are less important,” President Larsen says to the Barents Observer after the opening sessions in Tromsø.

Prime Minister Erna Solberg, Chairman of Arctic Frontiers steering committee Salve Dahle and Rector of Norway’s Arctic University Anne Husebekk had short introductions followed by an hour and a half with a ten person long list of introductions and an armchair Arctic debate on climate change, blue economy, politics and high north science.

Ole Øvretveit, Conference Manager of the Arctic Frontiers secretariat says it all has to do with changing focus.

“We had to compress the program and limit the ceremonial part,” Øvretveit explains.

Aili Keskitalo, former President of the Sami Parliament and keynote speaker at last year’s Arctic Frontiers conference, says it is of vital importance that Sami issues are voiced at venues like the Arctic Frontiers.

“We are talking visibility and recognition”, Keskitalo says when asked why being disappointed that the organizers of Arctic Frontiers this year didn’t gave the floor to a Sami voice at the opening.

“I am disappointed that you ditched the Sami Parliament from the high-profile opening of Arctic Frontiers. That is a harsh signal,” Aili Kesikitalo said in a tweet directed to the organizers.

Last year, when being President, Kesikitalo told the audience at Arctic Frontiers that a new leadership is needed in the debate on extraction of natural resources in the high north.

Gunn-Britt Ritter, Head of the Arctic and Environment Unit with the Sami Council says what happened in Tromsø reveals a view on Arctic issues that is not in line with the indigenous peoples’ interests.

“They name the conference Blue Future, but they don’t let the people fishing along the coast be heard. They discuss how to land oil and gas from the sea, but not the need to land fish. Maybe the organizers doesn’t want to hear the substance of Arctic life,” Ritter asks.

She says it is strange that the Sami President couldn’t get the floor at such high-profile opening. “We are the people living here and when guests from all around the world now comes to Tromsø to learn about life in the Arctic, it would of course be obvious that Sami voices should be during the opening.

Ole Øvretveit says the Sami Parliament is included in the program for Wednesday.

President Larsen hopes to be included next year. Øvretveit tells that the orginizers are in dialogue with the Sami Parliament, also regarding next year’s program.

Government gives thumbs up for mining company, will be allowed to dump wastes in Arctic fjord