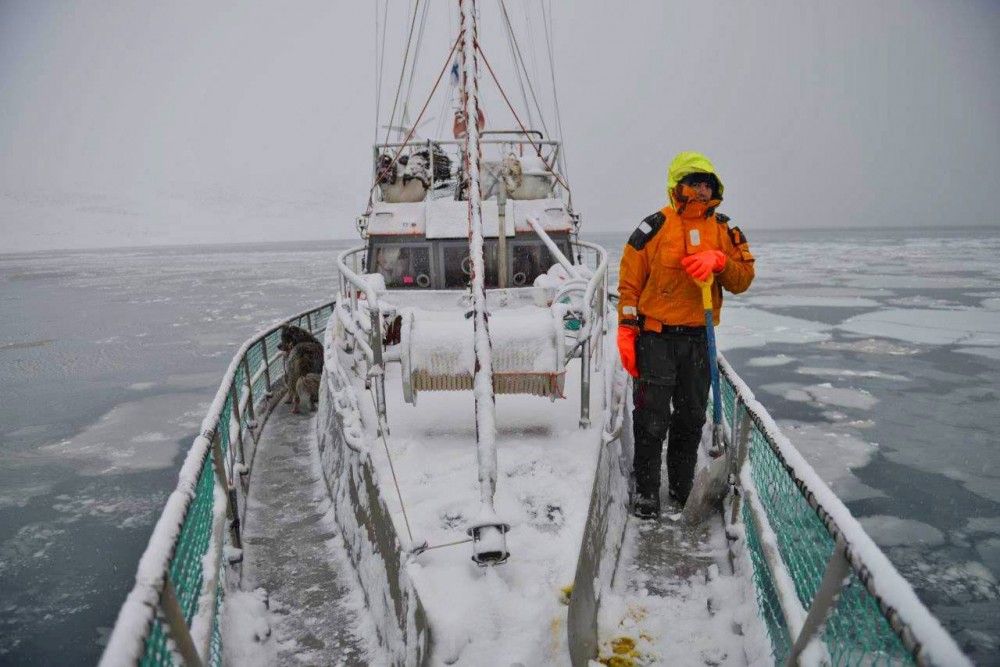 Long winter for the "Arktika-2" and its crew on Svalbard. Photo: Private from Gilles Elkam

The Frenchman intended to sail eastwards towards the New Siberian Islands and then let his 47 feet big ship Arktika-2 drift with the ice. While drifting, Elkaim was to make it to the North Pole point with dogs sleds. It would become an epic adventure in the footsteps of Fridtjof Nansen and his Fram expedition of 1893–1896. In complete autonomy, the «Arktika» and its crew would spend two years in Arctic waters.

That did not happen.

The weather conditions forced the explorer and his two-person crew to instead set course for Svalbard, the Norwegian Arctic archipelago. That started a nightmare for the French crew. And a conflict with local Norwegian authorities.

Tough treatment
The Svalbard government in mid-October towed the Arktika-2 from the Duve Fjord to Longyearbyen, the local administrative center. At the same time, passports and computers were confiscated and the seven expedition dogs banned entry to the islands. Elkam was also fined 25.000 Norwegian kroner for illegal entry to the strictly protected Duve fjord.

«We refuse to pay the fine because of the very agressive investigation of Svalbard administration», Elkaim says to the Barents Observer. «We will go to court against Sysselmannen [the Governor], we want to denounce the faults of this administration on different levels», he adds.

He also maintains that Norway has violated the Treaty’s Article 2, under which the country is committed to ensure «the preservation and re-constitution of the local fauna and flora».

The Svalbard Treaty from year 1920 gives Norway full sovereignty over the archipelago. Signatory states are given equal rights to engage in commercial activities on the islands. A total of 45 countries, among them France, have signed the agreement.

«During the trial, we will unveil the environmental issue [violations] and accuse the Sysselmannen of being responsible for it with proofs», he says. «We will argue the misinterpretation of article 3 of the Treaty by Norwegian Government and violation of article 2 about environment, Elkaim says.»

That interpretation is in stark conflict with the management regime applied for decades by Norwegian authorities. The Svalbard Environmental Protection Act includes a wide range of measures aimed at safeguarding the pristine nature. «The Duve Fjord, the site where the Arktika-2 was located, is subjected to strict regulations», Terje Carlsen, Communication Advicer at the Governor of Svalbard previously told the Barents Observer.

Welcomed by the Russians
Meanwhile, has moved his ship to Barentsburg, the local Russian settlement on the archipelag. «Here, we have been most welcomed and got a lot of help to put our boat Arktika in safety», Elkam posted on his Facebook page.

The court case in Longyearbyen is to start on Wednesday February 22nd and last three days. Lawyer Brynjar Østgard will protect the Frenchmen, while the Norwegian side is represented with Deputy Governor Berit Sagfossen, a top legal expert.

«We are well prepared for this case, but being in Longyearbyen and with local jurors chosen by the Sysselmannen herself does not leave us with many chances», Elkam admits.

He is more ready for going out to sea. «We still have not given up out expedition to the North Pole», he underlines.