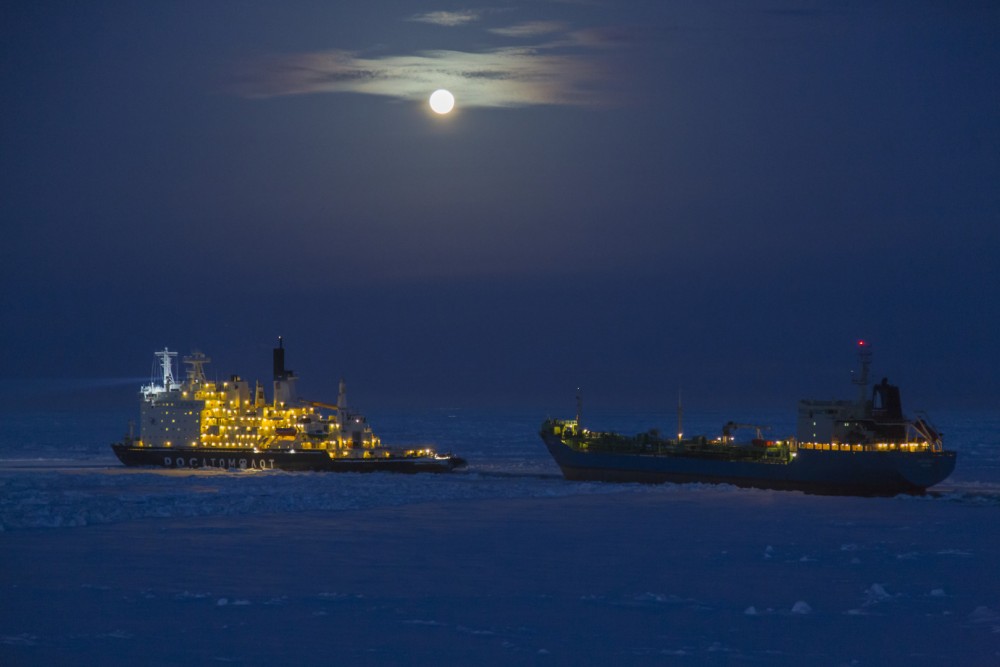 Icebreaker escort in the Gulf of Ob. Photo: Gazprom Neft

A lion’s share of the growing shipping is linked with the development of new industrial projects, among them the Yamal LNG and the Novy Port oil field. As many as 120 ships last year visited Sabetta, the new Yamal LNG sea port on the northeastern end of the Yamal Peninsula. Most of them needed assistance from Rosatomflot.

Also the militarization of Russian Arctic waters adds load on the icebreakers. Numerous shipments were in 2016 made to the new military bases on archipelagos like the Franz Josef Land, New Siberian Islands, Severnaya Zemlya and Wrangel Island.

It is the «50 Let Pobedy», the newest of the nuclear-powered vessels, which accounts for the biggest number of operations. In the period from August 2016 to early February 2017, the vessel escorted 99 ships, Rosatomflot informs. It will soon be out of service for a period. When it returns from its ongoing voyage in mid-March the ship is to undergo a planned round of upgrades in a local dry dock, ship captain Dmitry Lobusov confirms.

In the last part of 2016, Rosatomflot’s capacity was strained following the repair and service on the «Yamal», the ship built in 1993. According to the company, the ship was back in duty in Arctic waters only in February this year.

Russia currently has a total of four icebreakers in operation. In addition, the Rosatomflot operates the «Sevmorput», the nuclear-powered container ship, which was upgraded and re-installed in the fleet in 2016.

Capacity will soon improve. The new and powerful «Arktika», currently under construction in the Baltic Yard near St. Petersburg, is due to be ready for sailing in fall this year.