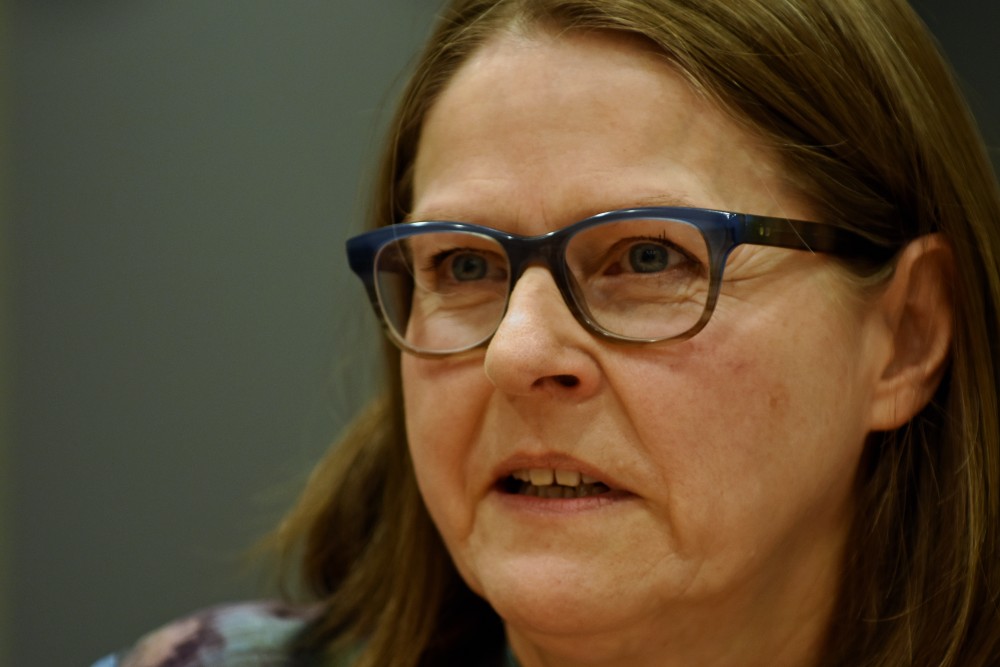 Heidi Hautala is memeber of the European Parliament for the Greens. Photo: Thomas Nilsen

Heidi Hautala fears Norway by the move justifies Arctic offshore drilling for Russia and the US.
Read in Russian | Читать по-русски
By

Only a few days ahead of the European Union’s plenary debate on Arctic policies, the Norwegian Government on Monday announced a proposal to add 93 Barents Sea blocks into the forthcoming 24th License Round for offshore drilling.

A majority of the blocks are much further north than today’s operational fields like Goliat and Snøhvit off the coast of Finnmark.

On Thursday, the European Parliament is to vote over a policy resolution for the Arctic.

The text up for debate calls «for a ban on drilling in the icy Arctic waters of the EU and the EEA» - that includes Norway. Although Norway’s current ongoing extractions of natural gas from the Snøhvit field and oil from the Goliat field is way south of «icy» waters, the wording has triggered debate.

The Socialist and Democrats (S&D) has now tabled an amendment and asked for a split vote. Instead of calling for a ban on the extraction of Arctic oil and gas, the group suggests a more general wording emphasizing that «in general, the use of fossil fuels will further contribute to and accelerate the climate change threatening our plant.» … and…. «EU must cooperate with international partners in order to achieve a just transition away from offshore drilling in general and in the Arctic waters in particular.»

Heidi Hautala, a Finnish Member of European Parliament (MEP) and vice-president of the Green/EFA group emphasizes to the Barents Observer that the word «icy» indeed excludes the Norwegian projects.

«The concerns in the North of Norway are understandable, but not justified,» she says.

«If one puts this into perspective of the absolute urgency of combating climate change, it is really very important for the EU to stop the subsidies to fossil fuels,» Heidi Hautala argues.

«We have to work international towards a future total ban on Arctic oil and gas production in order to achieve low carbon economy,» she says and fully support the wording in the resolution that in February was adopted by the Committee on the Environment, Public Health and Food Safety as well as the European Parliament’s Committee on Foreign Affairs.

The voting in the European Parliament, however, is not binding. Furthermore, Norway can point to international law when opening for drilling at more blocks on its Arctic continental shelf. Oil drilling in the Norwegian sector of the Barents Sea is a sovereign decision to be taken by Oslo, not Brussels, Norwegian politicians argue.

Most of the new blocks proposed on Monday are located at 73°N and 74°N. That is close to Bjørnøya, the southernmost island of the Svalbard archipelago.

For the oil industry, the blocks potentially constitute huge new findings. The Barents Observer has reasons to believe that Norway’s Minister of Petroleum and Energy, Terje Søviknes, and Director General Bente Nyland with the Petroleum Directorate will announce new estimates on oil and gas at the Barents Sea conference in Hammerfest on April 25th. The increased estimates are based on recent seismic surveys in the area further north in the Barents Sea towards Svalbard.

Sigurd Enge, Arctic advisor with the Bellona Foundation, says to the Barents Observer that he is not surprised by Norway moving further and further north with its oil-drilling.

«This shows that Norway is worst in the Arctic. No others are further north,» he says.

«By announcing blocks at 74°N we have passed the limit for decent and responsible behavior,» Sigurd Enge argues and points to both the pristine environment in the Svalbard area and the rapid changes in Arctic climate due to emissions of carbon dioxide from burning fossil fuel.

«The announcement of Norway to open the 93 new blocks in the most vulnerable northern waters of Barents Sea is extremely disappointing. Norway not only concretely adds to climate change including in the Arctic, but also justifies Arctic sea drilling for Russia and US,» Hautala says.