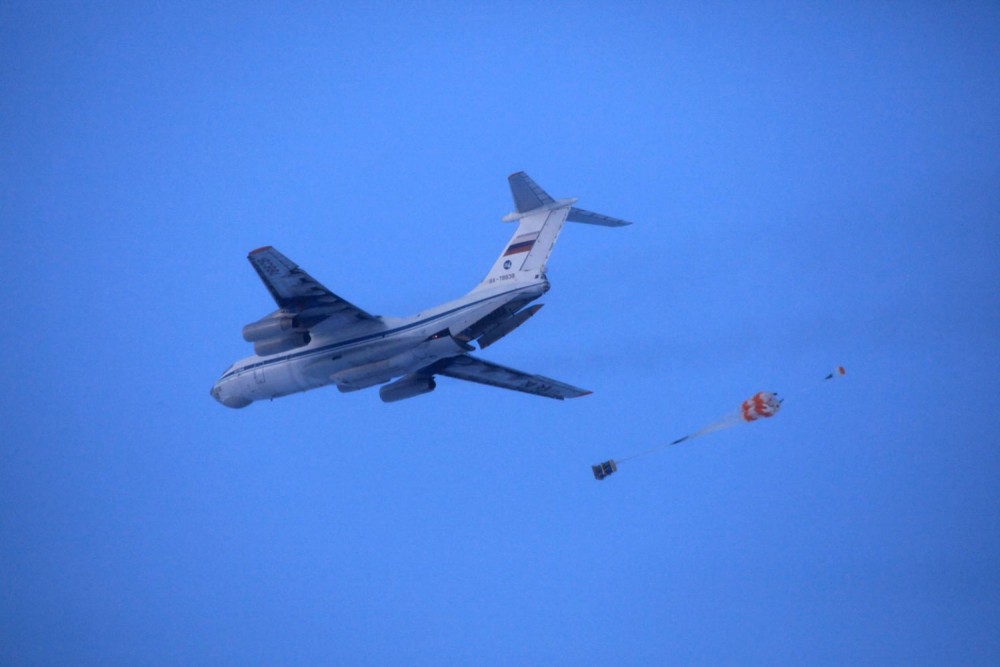 This is the best ice floe! Two helicopters successfully bring polar explorers to the site for this year’s North Pole station.
Read in Russian | Читать по-русски
By

According to chief operations officer Irina Orlova, two helicopters from the Aerogeo company on Friday arrived to the site for the new ice camp.

This year’s Barneo camp is located close to the North Pole at 89º24’N 135ºW, on a spot by the explorers named Zhalyuzi-2.

On their way to the site, the helicopters first had to refuel at Zhalyuzi-1, at 86º45’N 095º57’W. Soon after their landing, an aircraft type Il-76 made an airdrop of fuel on site. The two helicopters re-fueled, and thereafter continued to Zhalyuzi-2.

Also the aircraft proceeded to Zhalyuzi-2 where nine men were parachuted to the ice.

The operations all proceeded smoothly, Orlova writes on her Facebook page.

Temperature on site is minus 20 ºС and winds 3-4 m/s. Ice conditions in the area are good, the explorers say.

The helicopters, originally based in Krasnoyarsk, had made their way northwards since 19th March. The last part of the journey was made from the Sredny Island on the Severnaya Zemlya.

The aircraft has returned to Murmansk where it will be loaded with more goods and equipment for the station. It is due to return to Zhalyuzi-2 on Saturday.

Following the establishment of the Barneo-2017, the camp organizers will use the airport in Longyearbyen, Svalbard, as logistical hub for the operations. An agreement between Svalbard Governor Kjerstin Askholt and Aleksandr Orlov, Vice President of Russian Association of Polar Explorers, was reached on 13th March.

The original plan, however, was to move all logistical operations to Franz Josef Land.

«Following journalists’ publication of misleading news about last year’s expedition, there appeared problems in our relationship with Norwegian aviation authorities, and these were so serious that we were forced to abandon our work in Longyearbyen in favor of Franz Josef Land», Irina Orlova says.

According to the chief operations officer, the developers of Barneo-2017 changed their minds after leading tour guides insisted that the Longyearbyen remain base for the activities.

It was the Barents Observer which in April last year first reported about Russia’s plan to use Longyearbyen airport for bringing in military instructors to an airborne drill in the Arctic. That created an uproar and subsequent introduction of stricter regulations by Norwegian aviation authorities.