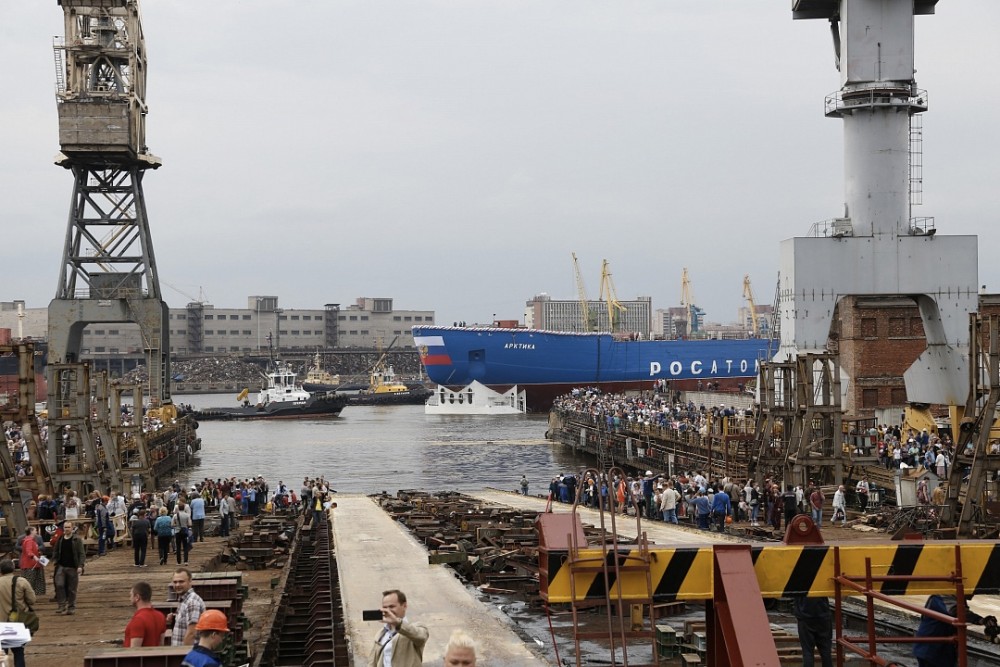 The first LK-60 icebreaker "Arktika" was put on the water in St. Petersburg in 2013.

The «Arktika» will be ready for sailing in May 2019, one and a half year after the original schedule.
Read in Russian | Читать по-русски
By

Talking in this week’s Arctic Forum in Arkhangelsk, Russian Deputy Minister of Industry of Trade Vasily Osmakov confirmed that the «Arktika» will be handed over to Rosatom in May 2019.

The icebreaker, the flagship of Russia’s new class of nuclear icebreakers, was originally to be ready for sailing in December 2017. Meanwhile, the two other icebreakers of the class, the «Sibir» and the «Ural» will be completed in November 2020 and November 2021 respectively, a press release from Rosatom reads.

The ships are all under construction at the Baltic Yard in St.Petersburg. They are commissioned by Rosatom, the country’s nuclear power company.

This week’s statement of Deputy Minister Osmakov comes after a period of mounting pressure on government from both the shipyard and Rosatom. They both argue that the icebreaker program must be delayed following failed deliveries of steam turbines by sub-contractor Kirovsky Zavod.

The Kirovsky Zavod has experienced major problems with the manufacturing of the turbines and has consequently been sued by the Baltic Yard.

The turbines for the powerful icebreakers were originally to be delivered by Turboatom, the Ukrainean company based in Kharkiv. However, the ongoing conflict with Ukraine put a stop to that deal.

The icebreaker class LK-60 (project 22220) will be the world’s most powerful vessels of the kind. They will be equipped with the RITM-200 nuclear propulsion unit with two 175 MW capacity reactors and are able to break through three meter thick ice. The ships will be 173 meters long and 34 meters wide. They will be based in Murmansk as part of the state-owned Rosatomflot fleet of nuclear icebreakers.