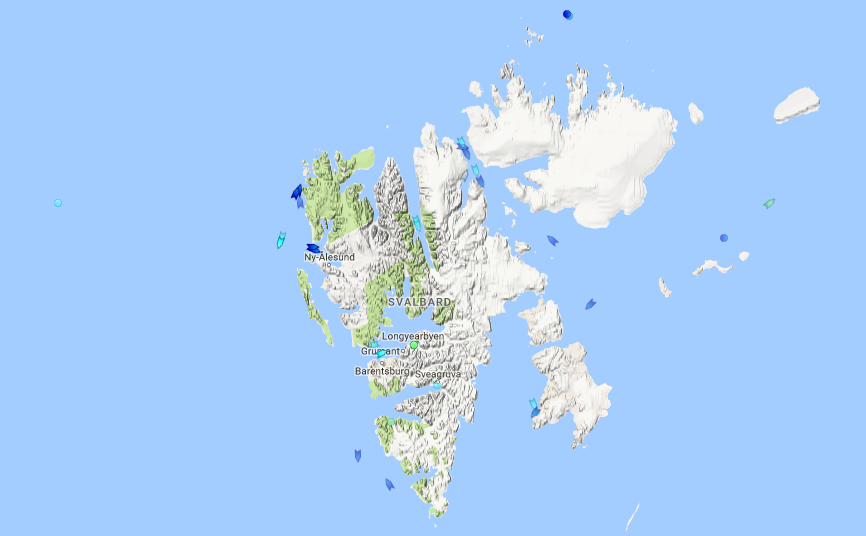 Screenshot from MarineTraffic.com shows passenger vessels (blue) even at the most remote places north of Svalbard.

17 passenger vessels are Monday sailing in the waters around Svalbard. Next year will be even more crowded.
Read in Russian | Читать по-русски
By

While southern Europe swelters under the heat wave «Lucifer», thousands of tourists cool down on board cruise vessels as far north in the Arctic as its possible to get.

It’s a paradox, but global warming opens more Arctic waters for vessels with tourists who want to see the sea ice before it melts away. A quick look at Marine Traffic, a web portal tracking the Automatic Identification System (AIS) all civilian vessels are obliged to carry, shows passenger vessels all north to 81° North.

With little sea ice even north and east of Nordaustlandet, the second largest island on the Svalbard archipelago, passenger vessels are tempted to sail in waters where no other cruise vessels have been before.

Currently, 17 passenger vessels are sailing around Svalbard, from the high north to Bjørnøya in the south. On the west coast, two areas are even crowded. Three vessels are Monday morning near Magdalenefjorden, a fjord famous for its glacier stretching all out in the water. Also outside Ny-Ålesund, the world’s northernmost settlement, three vessels are lining up. Ny-Ålesund is known for its community of researchers from around the globe. It is not only cruise-passengers who want to learn more about Arctic climate and nature in times of changes.

This weekend, the largest vessel ever to make port call to Longyearbyen, MSC «Preziosa» - vessel with capacity of more than 4,000 people. Next year, the even larger cruise vessel from the same company, MSC «Meraviglia» has listed Svalbard as destination, the local newspaper Svalbardposten reports.

As previously reported by the Barents Observer, cruise traffic to Svalbard this season is up some 20 percent. About 70 more port calls will be made by cruise vessels this year compared with 2016.

Most passengers sailing to the high north are Europeans. American passengers chose voyages sailing the fjords further south on Norway’s west coast, while Asian tourists are not yet queuing up for the traditional cruise voyages, Erik Joachimsen, Managing director of Cruise Northern Norway & Svalbard told the Barents Observer.

A new trend is voyages starting in Longyearbyen and heading for Russia’s Franz Josef Land.

Until recently, Russian flagged vessels were the only ones allowed to sail with passengers to the mysterious fairytale-looking Arctic islands of Franz Josef Land. Located even further north than Norway’s Svalbard archipelago, the glacier covered rocks and mountaintops in the very northeastern corner of the Barents Sea have been one of the most difficult  places on planet earth to visit. Not so any more.

This summer, Poseidon Expedition sails three voyages to Franz Josef Land with its cruise vessel «Sea Spirit». All were sold out and the voyages announced for the 2018 season already has a waitlist. A cruise to the Arctic is not for budget travelers. Rates start at $8,995 per person in a triple classic cabin. A premium suite is twice that price. The voyage last for two weeks.

Other vessels at Svalbard right now, like the «Polar Pioneer» and «Fram», are sailing from Svalbard to Greenland this summer.