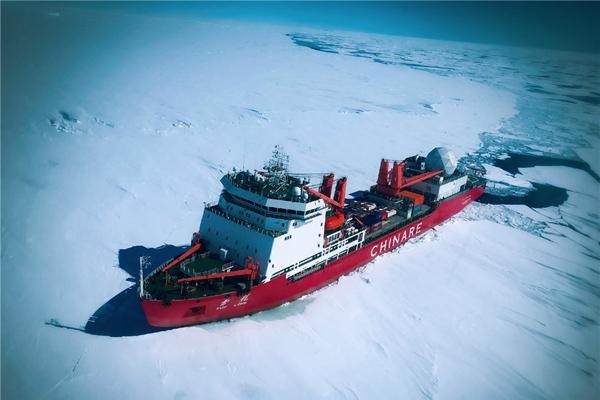 On Monday, «Xue Long» is doing research in the Norwegian Sea, sailing a back-and-forth pat half-way between Bjørnøya and Jan Mayen.
Read in Russian | Читать по-русски
By

It is not known what specific research the vessel is doing in the Norwegian Sea. The vessel’s path can be tracked via the portal MarineTraffic.com. There are 96 crew members on board, including teams of Arctic and oceanographic researchers.

This is the eight Arctic expedition with «Xue Long» (Snow Dragon), but the first time the icebreaking research vessel attempts to sail the Arctic rim, China’s state CGTN channel reports.

Circumnavigating the Arctic is expected to take 83 days and the voyage spent the two first weeks of August sailing north from the Bering Strait towards the North Pole. A map of the ship’s route posted by CGTN shows it sailed east of the North Pole, but far north of Russia’s Northern Sea Route.

The scientists on board did seven stops in in the Arctic ice, conducting «ice station works,» according to CGTN.

Speaking at a press conferance in Shanhai before departure, Chief scientists of the expedition team, Xu Ren, said the voyage would focus on a series of frontier scientific research on marine biology, meteorology, geology and chemistry, such as ocean acidification and plastic pollution in the sea, Xinhua News Agency reports.

«Xue Long» will now expected to sail north-west, to crush the ice through the Northwest Passage, in China’s first attempt to navigate a possible shipping route linking the Pacific and Atlantic Oceans through islands of the Canadian Arctic.

For China, there are three main objectives in the Arctic; research, natural resources and new trade routes.

Railway and port infrastructure were on Vice Premier Wang Yang’s agenda when participating at Russia’s Arctic Forum in Arkhangelsk in March.

While Russia’s Northern Sea Route, north of Siberia, is nearly ice-free this time of the year, the Northwest Passage has more ice and more multiple years ice making it harder to navigate.

«Xue Long» is China’s first icebreaker, built in Ukraine in 1993. On bord, there are a data processing centre, seven laboratories with a total area of 200 square meters. It has three smaller boats and a helicopter, a ccording to the portal of the Chinese Arctic and Antarctic Administration.