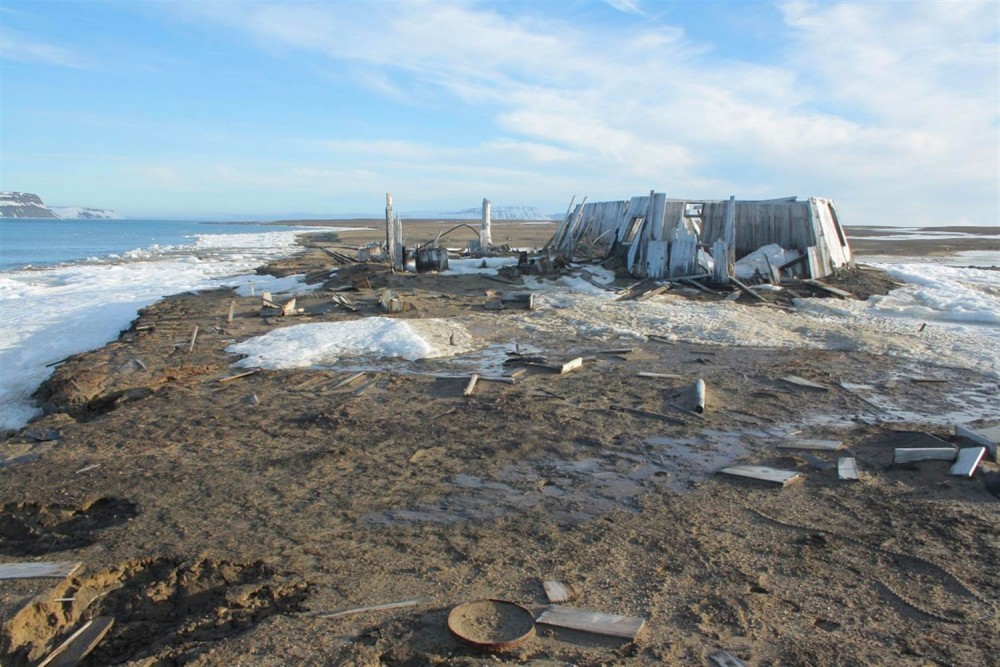 The more than 100 year old remains of the U.S. expedition are about to be washed into the Arctic ocean.
Read in Russian | Читать по-русски
By

An expedition force on August 1st set out from Murmansk with course for the far northern Russian archipelago. The destination is the island of Alger and the site where Evelyn Briggs Baldwin in the years 1901-1902 spent the winter on his attempt to reach the North Pole.

The expedition force includes four people, all of them representatives of the Russian Arctic National Park. They are making it to the Alger Island with help of nuclear-powered icebreaker «50 let Pobedy», which is on a tourist voyage to the area, a press release from the national park informs.

The researchers from the national park are in a hurry. The remains of the historical North Pole expedition are about to be washed at sea because of aggravating erosion in the area.

According to Yevgeny Yermolov, a representative of the national park, there is an urgent need to map the historical object and collect items of historical importance. Archeological excavations on site will be made on a later stage, he says.

The historical importance of the Baldwin camp is considered significant. It is the best preserved artifact from the era of the first explorers of Franz Josef Land, Yermolov says. Russian Minister of Natural Resources Sergey Donskoy earlier this year granted his support to the development of a new outdoor museum in the area. The museum could include several branches located on selected sites, among them on both the Franz Josef Land and the Novaya Zemlya, and exhibit items from historical expeditions in the area, among them the Baldwin expedition.

The American explorer and meteorologist Evelyn Briggs Baldwin in 1901 set out to reach the North Pole. He was forced to spend the winter on the island which he named after the U.S writer Horatio Alger.

The expedition was financed by William Ziegler. Included were 51 men, 420 dogs, 15 ponies and 60 sleds. The Baldwin-Ziegler expedition never made it to the North Pole.

The Russian Arctic National Park includes the Franz Josef Land and parts of Novaya Zemlya. The former archipelago has a total of 192 islands which stretch over a 375 east-west area. The islands are objects of interesting interest among Arctic tourism companies.