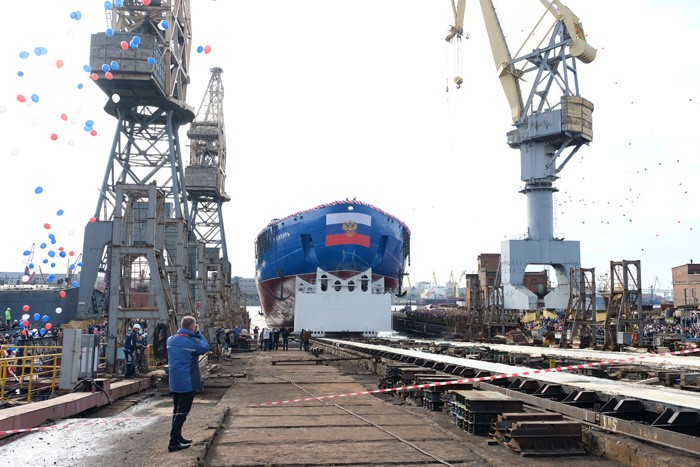 The haul of «Sibir» was floated out on September 22. Photo: Rosatomflot

Baltic shipyard in St. Petersburg on Friday floated out the second of the new generation powerful icebreakers aimed for the Northern Sea Route.
Read in Russian | Читать по-русски
By

The first of the class, «Arktika», was put on water last year and will be commissioned in mid-2019. «Sibir» will follow a year later and is expected to make her first port-call to Murmansk in November 2020, Rosatom, Russia’s Stae Atomic Energy Corporation, informs.

A third icebreaker of the class, «Ural» will start sailing in 2021.

As previously reported by the Barents Observer, Russia’s new icebreakers are significantly behind schedule, allegedly due to the ruling east-west sanction regimes. Steam generators for the vessels were originally to be delivered by Turboatom, a Ukrainian company based in Kharkiv. The current war in eastern Ukraine put a quick stop to that deal. Also General Electrics’ deliveries of the electric propulsion systems for the icebreakers was stalled and Russian systems were used instead.

When in operation, the three new icebreakers will be the most powerful in the world. Powered by two RITM-200 reactors with a capacity of 175 MW the vessels will be able to break through three meter thick ice. On board, there is a crew of 53.

The icebreakers will be based in Murmansk on the coast of the Barents Sea. Here, Atomflot base serves as home port and service centre for what is the world’s only fleet of civilian nuclear powered vessels.

The three new icebreakers, «Arktika», «Sibir» and «Ural» are replacing older icebreakers, of which two have the same names «Arktika» and «Sibir».

When all three vessels of the Project 22220 are commissioned by 2021, the fleet of nuclear powered vessels operated by Rosatom from Murmansk will consist of eight vessels.