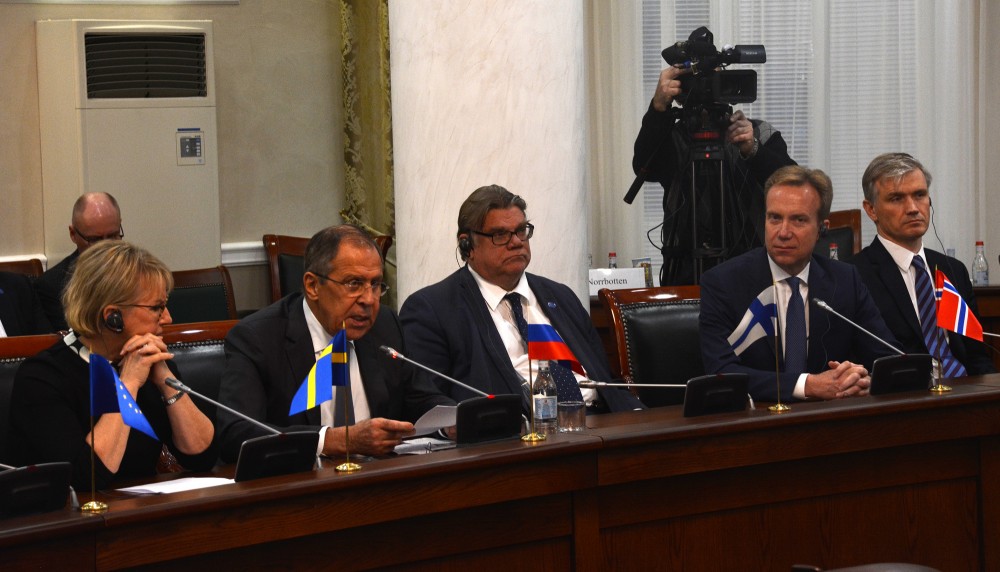 The Russian foreign minister accuses Norway of encroaching on Russian rights on the Arctic archipelago.
Read in Russian | Читать по-русски
By

The setting was Barents Cooperation and cross-border interaction, but it was Arctic militarization and Norwegian policy at Svalbard which became the key issues in today’s press conference following the Barents Euro-Arctic Council meeting.

In what appeared as a well-prepared answer, the Russian foreign minister lashed out against his Norwegian counterpart.

Relations in Spitsbergen could clearly have been much more constructive, he underlined. According to the foreign minister, Russian legitimate rights in the area are repeatedly being restricted.

«The Russian MFA last year submitted two diplomatic notes about Svalbard to the Norwegian side, but no response has been made,» Lavrov complained.

«We have on several occasions called for dialogue over these issues, but the Norwegians do not respond. I believe this does not correspond with good neighbourly relations», he underlined.

The statements come after newspaper Kommersant recently published a report shedding light on strategic document from the Russian Ministry of Defense allegedly highlighting the archipelago as a potential conflict area.

According to Lavrov, Norway is illegitimately restricting Russian company Arktikugol and its flying with helicopters in the archipelago, and also the development of Russian research and tourism activities in the area.

He also complained about the local Norwegian tax regime, which reportedly does not allow the local Russians to spend collected taxes for their own purposes in Barentsburg, the Russian-dominated local settlement.

«We are talking about very concrete issues, about Russians in the area engaging in activities permitted by the Svalbard Treaty.”

The treaty from 1920 gives Norway full sovereignty over the archipelago, but individuals and companies from the signatory states are allowed to engage in economic activities. The Russians have since the early 1930s operated coal mines in the area and are currently in the process of building up local research and tourism facilities.

«Norway is complying to every comma in the Svalbard Treaty,» Børge Brende responded. «This is a part of Norway and that should not be questioned,» he underlined.

«But we are taking great effort to make Svalbard the best managed Arctic archipelago in the world, and that concerns also environment.»

Beyond that, the Norwegian foreign minister said he was not much interested in using the press conference to discuss Svalbard. The issue is highly sensitive. And it was Brende’s last day as foreign minister. After four years in the post, he now leaves Norway to become president in the World Economic Forum

The Russian critical words against Norway did not stop with Svalbard. According to the Russian foreign minister, there are worries in Moscow also about Norway’s stronger military emphasis on Finnmark, the country’s northernmost region.

«Yes, we are of course concerned about the buildup of troops and the stronger role of Nato in the region,» Lavrov said.

«We see this as part of a carefully planned strategy directed against Russia.»

«Considering the fact that we are neighbours, we would have expected otherwise,» he underlined

However, at the same time, earlier the same day, Lavrov praise the regional government of Finnmark for its friendly and cooperative approach to neighbouring Russia. Finnmark this week took over the chair of the Barents Regional Council, a cooperation body including the northern territories of Norway, Russia, Finland and Sweden.