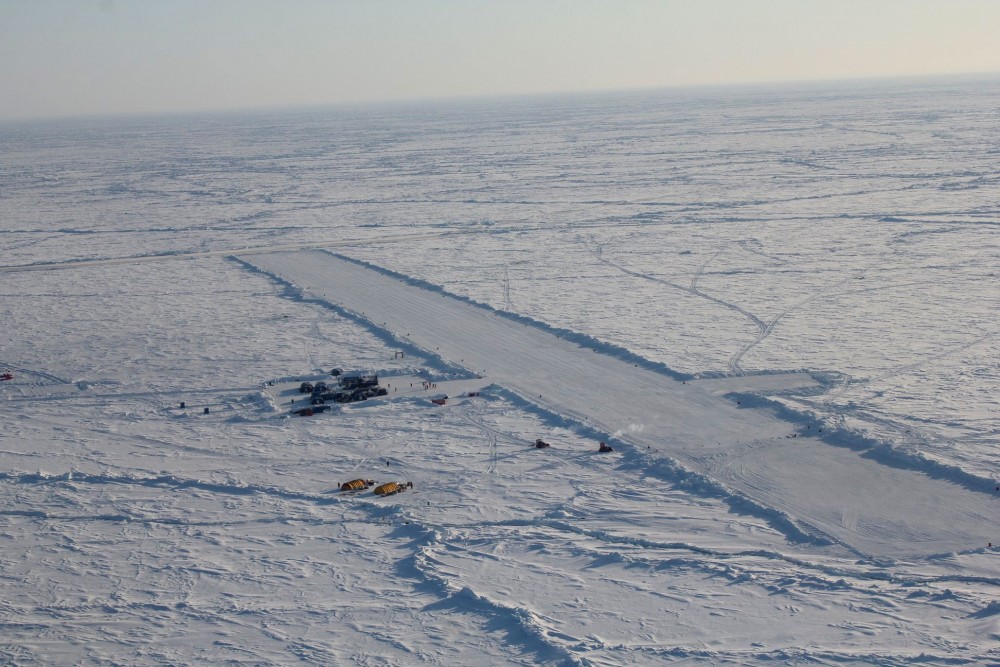 The ice became too thin and the cracks too many. This year’s Barneo North Pole base existed only 12 days.
Read in Russian | Читать по-русски
By

«That is all, we are finishing this season», said camp organizer Irina Orlova on 25th April. «The whole crew has returned to Longyearbyen, and will proceed to Murmansk», she added in a social media post.

It became the shortest ice drift in the 16 years history of the Barneo camps. The camp officially opened on 13th April and was abandoned only 12 days later.

Similarly, the ice drift of the campers was shorter than ever. The Barneo-2018 drifted only about half the distance of the Barneo-2017.

Only few years ago, the duration and ice drift of the Barneo was far more comprehensive. In 2015, the drift lasted 27 days and the distance was about three times longer.

«This year’s season was short, but we still managed to do everything as planned,» Orlova says on her Facebook page. During the short life of Barneo 2018, the ice base served as starting point for the North Pole Marathon, various research activities and two groups with tourists. Several groups used the camp for their North Pole expeditions, among them the 19 students from Moscow who took part in an expedition organized by explorer Matvey Shparo, and the Young Explorers NORTH Expedition.

On the 18th April, as many as 70 people were on their way from Barneo to the North Pole point, says Orlova.

The chosen ice floe was discovered on 9th April. It had up to 180 cm thick first-year ice and was located on the coordinates N 89*26.72’, E 129*42.35’. Nearby was located a suitable reserve ice floe which could be used in case of an emergency situation.

The camp organizers used two helicopters to find the site, whereupon parachuters were dropped from an Il-76 aircraft.  In the process were established two base camps, the Zhalyuzi-1 and Zhalyuzi-2. A total of 23 people were involved, among them 12 helicopter crew members and eight parachutists.

The landing strip made for an aircraft An-74 had to be repaired and changed at least two times during the period.

Like previous years, the Barneo-2018 used the airport in Longyearbyen, Svalbard, as logistical hub for the operations.

The temporary ice camp has been put up around this time of year annually since 2002. The ice base is sponsored by the Russian Geographical Society and has normally lasted for about one month. It is used as a base for scientific research and for expeditions to the North Pole, and has during the last years become a more and more popular destination for tourists.

The camp has a 1200 meters long and 40 meters wide runway capable of receiving An-74 airplanes. A total of 12 heated living modules are erected and all needed basic infrastructure established.

Normally, more than 250 persons have visited Barneo during the season.

Traditionally, the Barneo camps come in addition to the state-sponsored North Pole bases, organized by the Russia and the Soviet Union since 1937. However, during the last couple of years, it has become more and more difficult to find ice floes solid enough to hold a station, and the last “real” ice station, “North Pole-40”, was established in October 2012,  and had to be evacuated in May 2013, because the ice floe the base was placed on, started to break apart.