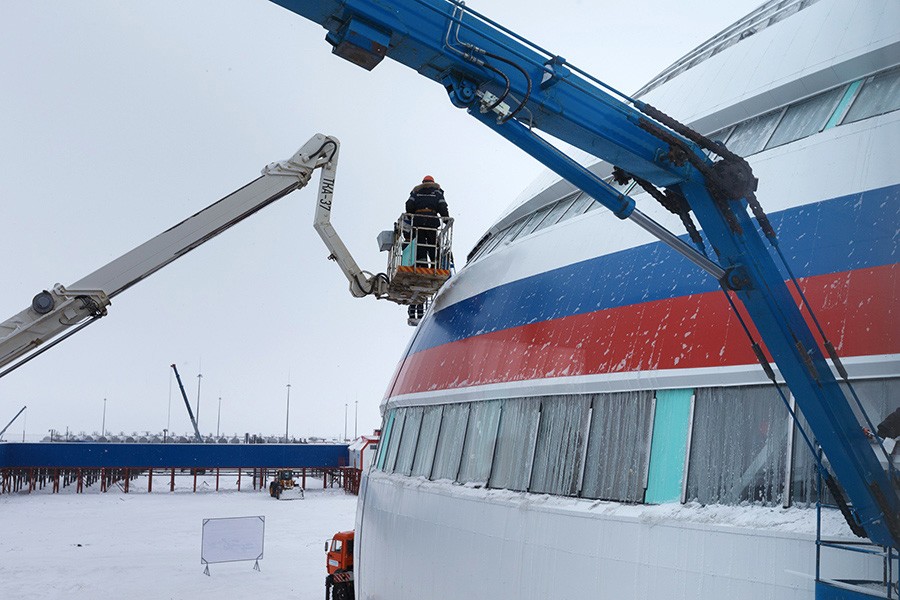 Construction of base at Franz Josef Land. Photo: mil.ru

Two men with close ties to the Ministry of Defence are charged with theft of almost 3 billion rubles in connection with the building of new Arctic Navy bases.
Read in Russian | Читать по-русски
By

According to prosecutors, Dmitry Bushmanov and Aleksey Ekkert stole 2,9 billion rubles (€38 million) in connection with the construction of Navy base objects in Novaya Zemlya, Wrangel Island and Cape Shmidt.

The two men own the construction company Rusalians Stroy, which in 2014 won the multi-billion rubles tender. Up to 3.2 billion rubles of state money was transferred to the company as advance payment. A lion’s share of that money was subsequently stolen by Dmitry Bushmanov and Aleksey Ekkert, prosecutors say.

According to newspaper Kommersant, a big number of additional cases against Rusalians Stroy have been filed during the last years.

Still, none of the men have pleaded guilty, and in a court hearing last week they won a partial victory when the judge decided that the case will be returned to the general prosecutor for further assessment. According to the judge, several law violations had been made during the investigation, Kommersant reports.

Ekkert and Bushmanov have been behind bars since early 2016.

Both men have close connection with state apparatus. Aleksey Ekkert before 2009 worked in the Ministry of Defence. He has also worked in the regional administration of Nenets Autonomous Okrug and oil company Rosneft.

The case against Rusalians Stroy comes as Russia has invested big sums in the construction and upgrade of Arctic military bases.

By early 2017, about 1,000 workers were busy building more than 100 military objects in five Russian Arctic archipelagos. All objects were originally to be completed in the course of 2017.

Among them are 30 buildings and facilities on Alexandra Island, the base in Franz Josef Land. A similar number of objects are erected on the island of Wrangle and in Cape Shmidt, the two far eastern bases.

New technical positions and social infrastructure have been under construction also in Rogachevo, the military base on Novaya Zemlya.

The base of Kotelny in the New Siberian Island was reportedly ready to be handed over to the Northern Fleet already in mid-December 2016. Included in that project is the upgraded Temp airfield and the 12,000 square meter big trefoil-shaped Severny Klever housing and administration complex.

In April 2017, the 14,000 square meters military complex at the Nagurskoye base on Aleksandra Land, the northernmost of the islands of Franz Josef Land, was completed and ready for use.