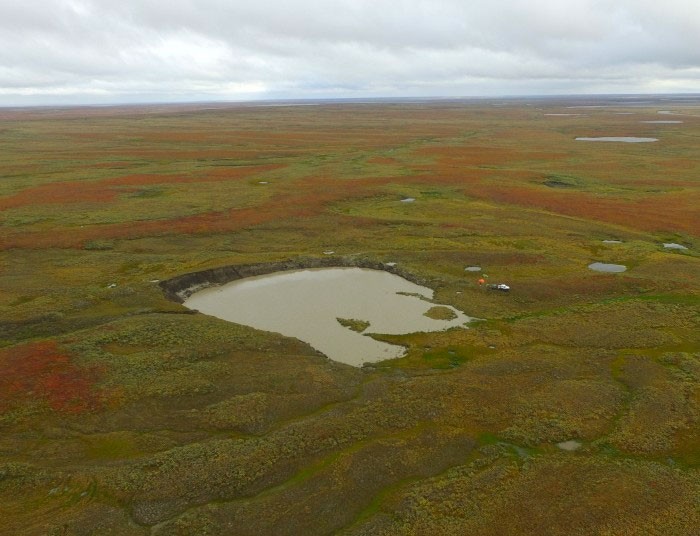 Sinkhole in Yamal filled up with water. Photo: A. Khomutova, ikz.ru

The biggest hole is now more than 60 meters wide and 200 meter deep.
Read in Russian | Читать по-русски
By

The formations believed to be created by eruption of natural gas from the ground are of growing concern both to researchers and the oil and gas industry in the far Arctic peninsulas of Yamal and Gydan.

One of the biggest formations is located only about four kilometers from a gas pipeline leading from the huge Bovanenkovo field, a project operated by Gazprom. This formation is now growing and has reached a diameter of more than 60 meter and a depth of about 200 meters.

The first sinkholes were discovered in 2014 and since then at least ten big-size holes have been mapped. In addition, there are indications that several more major holes are in the making. Researchers told RIA Novosti that they on the two Arctic peninsulas have discovered several small hills which they believe could be «gas bubbles» ready to burst.

According to researchers at the Institute of Earth Cryosphere in Tyumen, there is methane gas seeping out from the formations.

Several expeditions to the region have been made by institute representatives. The quick changes in the formations have been triggered by the abnormally warm summer of 2016, the researchers concluded after an expedition in 2017.

The areas in and around the peninsulas of Yamal and Gydan are believed to be the only in the world where the phenomena take place. They are triggered by melting of permafrost in the local unique geological and natural conditions.

One of the last eruptions of gas in the area came in late June 2017, when a group of reindeer herders suddenly saw flaring flames and a column of smoke in the distance from a village on the eastern coast of the Yamal Peninsula.

The gas eruptions could potentially create great damage to oil and gas installations in the area, and companies have over the last couple of years placed censors in the area which they hope will be able to tell about new and upcoming sinkholes. The measurement instruments are now on site in Bovenenkovo, Sabetta and Kharasavey, all of them key sites for the gas industry in the area.