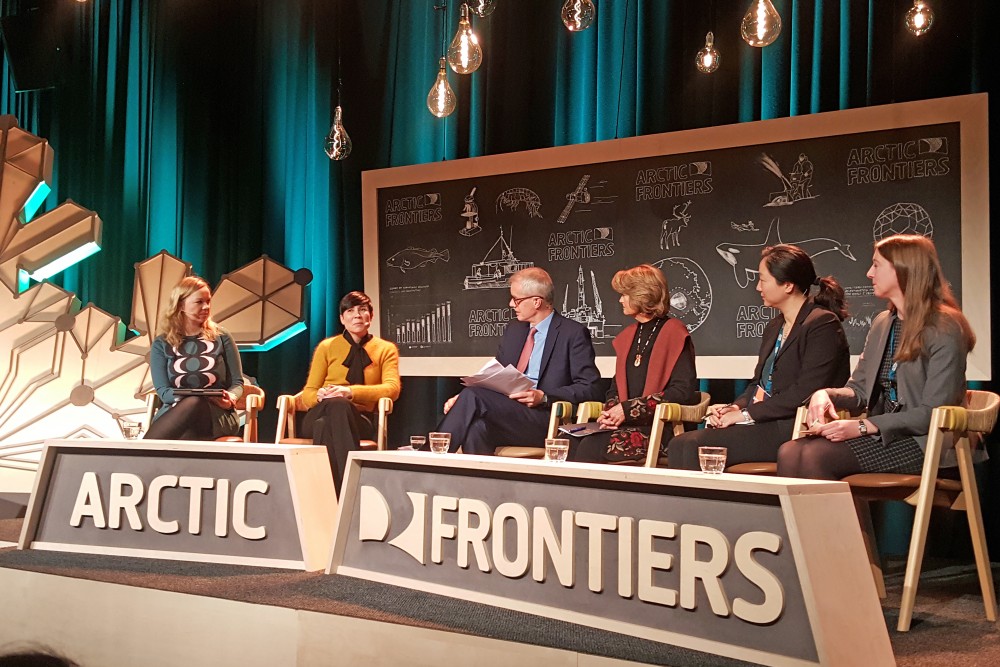 Ine Eriksen Søreide is invited to the prestigious conference "Arctic - Territory of Dialogue" in St. Petersburg in April.
Read in Russian | Читать по-русски
By

In her opening remarks at the Arctic Frontier conference in Tromsø on Monday, Foreign Minister Ine Eriksen Søreide said cross-border cooperation, within the structures of the Arctic Council and the Barents Council, is crucial for success in the high north.

“We need more international cooperation, not less,” she underlined.

For Norway, which shares a 200 km common border with Russia, a continuous dilemma is how to balance historically good bilateral relations in the north with a strong stand together with Europe and NATO on Moscow’s trouble-makings on the international stage.

Bilaterally, the two countries can display a long list of successful work; that be nuclear safety cooperation, joint management of marine resources in the Barents Sea and 30 years of culture, sport and other people-to-people activities involving the northernmost regions on both sides of the border.

Debating the future of Arctic cooperation, journalist Stephen Sackur, known from BBC HARDtalk, pointed out the obvious misbalance in the panel. “The mini-elephant in the room is that Russia is not on this stage,” Sackur said.

For Moscow, which feels the international isolation after sanctions were imposed due to the ongoing warfare in Ukraine, high-level visitors from Europe are of true symbolic importance.

In 2017, several Nordic foreign ministers and presidents participated when Vladimir Putin invited to Russia’s prestigious “Arctic – Territory of Dialogue” in Arkhangelsk. Among the participants was Norway’s then-Foreign Minister Børge Brende.

The conference is bi-annual and Ine Eriksen Søreide is on the list of invited guests when the event again kicks-off in St. Petersburg on April 9-10.

Asked by the Barents Observer in Tromsø, about why the Foreign Minister hasn’t yet visited Russia, Eriksen Søreide said “we will find a good way of having our first meeting either in Oslo or Moscow.”

In December, the Norwegian Foreign Minister in talks with Sergey Lavrov brought up the question about Russian military disturbances of GPS-signals causing safety concerns for civilian passenger planes and emergency preparedness actors on the Norwegian side of the border in the north.

Dialogue on all topics is important.

Eriksen Søreide, however, avoided a direct answer to the question about herself accepting the invitation from Russia to participate at the “Arctic – Territory of Dialogue” conference in April.

“We are looking into what kind of visits both in and out of Oslo regarding Russia that we will do this year,” she said diplomatically.

Russia’s Ambassador to Oslo, Teimuraz Otarovich Ramishvili, says to the Barents Observer that the invitation is open.

“There are many issues to discuss between us and Norway and there are priorities on both sides, and when the priorities corresponds then there is a room for discussion,” Ramishvili says.

The Ambassador recognizes that there have been better times for cooperation.

“Relationships are not that perfect as they have been before, that’s why I think that diplomats and others interested should work hard to work out serious agendas for ministers to discuss bilaterally, but our cooperation in Arctic Council and Arctic issues in general is very good.”

Ambassador Ramishvili tells that Foreign Minister Sergey Lavrov “is planning to come” to Kirkenes in October for the celebration of the 75th anniversary of the Red Army’s liberation of Eastern Finnmark region from German-Nazi occupation.

Lavrov was invited to the celebration as the two foreign ministers met in Milian, Italy, last December.

Smile for cooperation up north, but Lavrov still undecided on Kirkenes visit

Russia just got a “longer” border to Norway