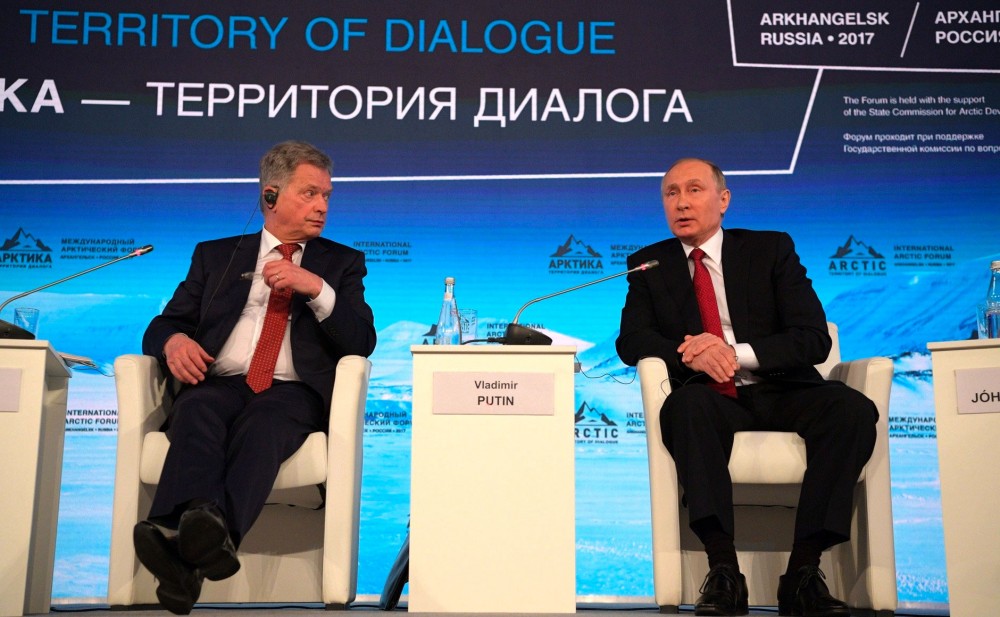 The President was hoping for hosting an Arctic Summit in Lapland this winter, but will instead travel to Putin’s high-level event near the end of Finland’s chairmanship period of the Arctic Council.
Read in Russian | Читать по-русски
By

Asked by the Barents Observer, the President’s office in Helsinki now confirms participation in Russia’s Arctic Forum in St. Petersburg on April 9-10.

“One particular reason for participating is that Finland is currently chairing the Arctic Council,” Hietajärvi elaborates.

Earlier this week, Norway’s Foreign Minister Ine Eriksen Søreide told the Barents Observer that both herself and Prime Minister Erna Solberg would be attending Arctic Forum. While Niiistö also participated in last Arctic Forum in Arkhangelsk in 2017, the event in April will be Solberg’s first visit to Russia since the 2014-political freeze following Moscow’s annexation of Crimea.

In Arkhangelsk two year’s ago, President Niinistö suggested to invite state leaders for an Arctic Summit in Finland. “We believe it is time to take the Arctic cooperation to a new level. Finland proposes to convening of an Arctic Summit to discuss a wide range of issues pertaining to the region and beyond,” the President said.

The event was supposed to happen in February this year, but it turned out difficult to get a ‘go’ from the two main attendees to such Summit; President Vladimir Putin and his US counterpart Donald Trump.

Climate changes and a strategy to tackle black carbon are the main pressing issues on President Sauli Niinistö’s Arctic agenda.

Although the state leaders of the eight Arctic nations did not team up for an Arctic Summit, the Foreign Ministers of the same nations will meet in Rovaniemi in May for the bi-annual Arctic Council Ministerial meeting. Here, Finland will hand over the chair of the Council to Iceland.

Iceland, and its President Guðni Thorlacius Jóhannesson, has not officially said anything about bringing on Finland’s idea of arranging an Arctic Summit for state leaders. Reykjavik, however, has previously been the venue for a top-level meeting between Moscow and Washington D.C.

In 1986, Ronald Reagan and Mikhail Gorbachev met in what later was said to be the key turning point in the Cold War.