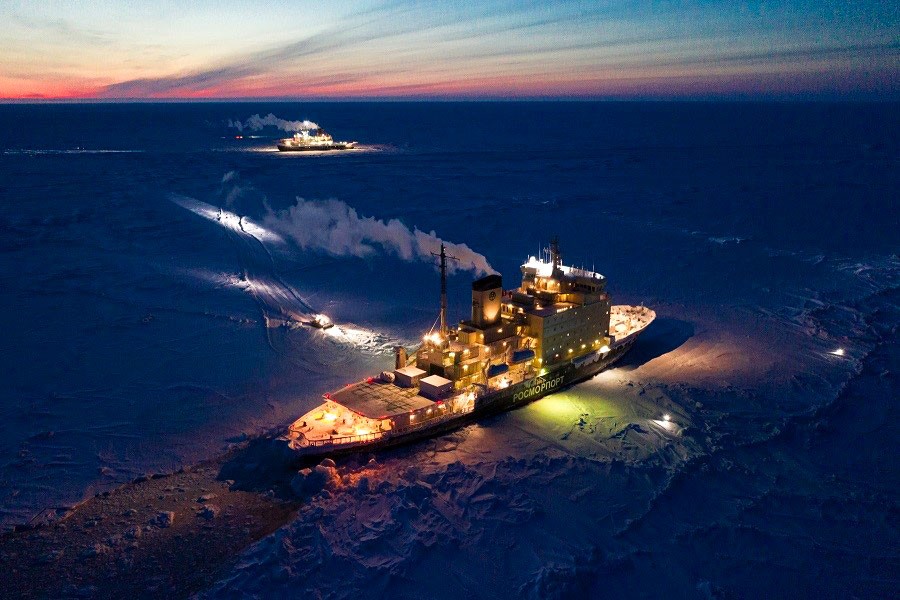 The 129 meter long diesel-engined vessel on 28th February reached the site of German Arctic research vessel «Polarstern», a long-awaited encounter for the members of Arctic expedition MOSAiC. On board the Russian ship were researchers and crew that are to replace the personnel that has served in the desolate Arctic ice since mid-December 2019.

Two days before the encounter, the «Kapitan Dranitsyn» had set a world record as it reached the northernmost position ever made by a diesel-engined vessel in winter time.

The «Kapitan Dranitsyn» dropped anchor 970 meters from «Polarstern», moored to the same floe and the handover of personnel and 43 tons of goods soon afterwards started across the frozen water.

The operation is part of the MOSAiC research expedition and has been carefully planned for many months. But not everything went as planned.

The Russian icebreaker experienced extreme hardships on its way north. The ship set out from Tromsø, Norway, on the 3rd of February and encountered highly difficult conditions as it later made it through the ice.

Ice thickness in parts of the area is as much as 160 cm and several places pack ice hummocks have grown several meters tall.

Repeatedly, the ship had to wait for improved weather and ice conditions, change course and circumvent extreme icy parts. On some of the days, the icebreaker managed to sail only 20 miles per day, a distance it normally manages to break through in a couple of hours, ship owner Rosmorport informs.

Following the difficult voyage, the «Kapitan Dranitsyn» has consumed far more fuel than planned and now needs assistance to make it back to the Russian mainland.

According to the Alfred Wegner Institute, it is icebreaker “Admiral Makarov” that is to come to the assistance of the «Kapitan Dranitsyn». The former will bring the extra fuel needed.

The “Kapitan Dranitsyn” on the 4th March left the site of the “Polarstern” and set course for Tromsø. On board is not only returning researchers and crew members but also collected research materials that now are to undergo additional analysis.

As of the 4th of March, the “Admiral Makarov” was still moored in Murmansk, ship tracking data indicate.

It is not the first time that the “Kapitan Dranitsyn” is experiencing ice conditions that are beyond the limits of its capacities. In the winter of 2018, the icebreaker got ice-locked for several months as it delivered goods to the east Arctic town of Pevek.

Four icebreakers from Russia, Sweden and China are planned to assist the «Polarstern» in the course of the year. Among them will the new Chinese icebreaker «Xue Long 2». In spring 2020, a landing strip will be built on the Arctic ice, to serve German research aircrafts Polar 5 and Polar 6.

On board the «Polarstern» are snowcats that lately has prepared the 900 meter long landing strip that is planned used for aircraft. The next shift of crew and personnel is likely to be done by aircraft, the expedition members say.

It is now Proffessor Torsten Kanzow from the Alfred Wegener Institute that is in charge as Chief Scientist on board. Kanzow last week arrived to site by helicopter.