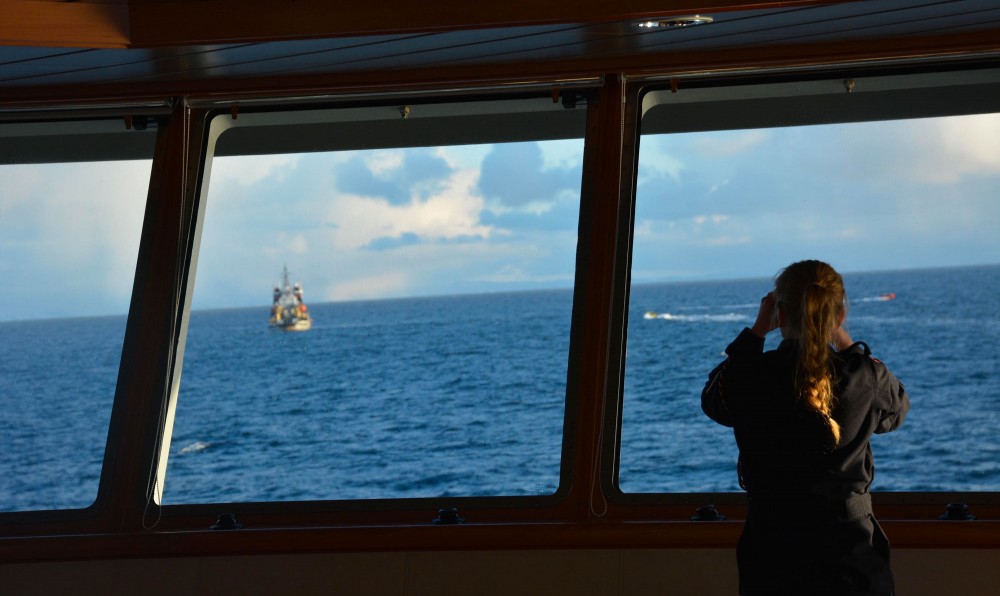 The Russian trawler that was caught in illegal fishing off the coast of the Norwegian Arctic archipelago paid its fine and everything seemed okay. Then came a diplomatic note from the Russian Ministry of Foreign Affairs.
Read in Russian | Читать по-русски
By

It was the 2nd April and a freezing cold day in the far northern waters of Svalbard. Temperatures were dropping to minus 20 degrees Celsius and an icy breeze was blowing over the rich Arctic fishing grounds.

On this day, a Norwegian coast guard vessel caught the 42 year old Murmansk-based trawler “Borey” in illegal fishing. Among its violations was the dumping to sea of undesired fish and the Coast Guard reportedly had the video recordings needed to prove its case.

The captain and shipowner quickly consented with the fine and confiscation of catch, and consequently avoided a forced escort to a north Norwegian port. It is normal procedure in the vast waters of the Barents Sea where fish stocks for several decades have been successfully managed jointly by Norway and Russia.

The “Borey” proceeded its fishing in the area and the case seemed settled and closed.

But then things took a new turn.

Few days after the incident, the Russian Ministry of Foreign Affairs sent an official note to the Norwegian Embassy in Moscow were it protested the action taken against the “Borey”.

The case was then addressed also by Foreign Ministry Spokeswoman Maria Zakharova in her weekly press conference. According to Zakharova, the incident, as well as other similar action taken by Norwegian authorities, “spur serious concern” on the Russian side.

“We expect from Oslo a constructive approach and close cooperation in the regulation of such cases, including within the frames of the Joint Russian-Norwegian Fishery Commission,” the top ministry spokesperson underlined.

The sharp Russian reaction comes on the backdrop of this year’s 100-year anniversary of the Svalbard Treaty, the international agreement that grants Norway sovereignty over the archipelago.

The signing of the Svalbard Treaty in 1920 and its subsequent ratification in 1925, gave Norway sovereign rights over the archipelago. However, with certain conditions. The archipelago was to remain demilitarized and individuals and companies from signatory states were allowed to engage in economic activity.

Russia is discontent with the way Norway manages the treaty, and on 4th February, Russian Foreign Minister Sergey Lavrov sent an official letter to his Norwegian counterpart Ine Eriksen Søreide where he expressed calls for “bilateral consultations” over the management of the islands.

Beside Norway, Russia is the only of the Svalbard Treaty signatory states that has taken use of its rights to engage in commercial activity in the area. Soviet authorities for decades supported extraction from several coal mines in the area, but today only the Barentsburg mine is in operation.

According to Lavrov, Russia feels discriminated by Norway and he signaled that the strict environmental legislation on the islands are introduced with an underlying aim at hindering Russian activities. The foreign minister also reiterated his country’s strong opposition to Norway’s establishment of a Fishery Protection Zone around Svalbard in 1977, an arrangement that extends Norwegian sovereignty to the shelf around the archipelago.

With its diplomatic note about the Norwegian Coast Guard action against the “Borey”, Moscow seeks to add pressure on Oslo.

In her press conference on the 17th April, Maria Zakharova reiterated that Russia does not recognize the protection zone and that it consequently believes Norway has no right to take action against Russian vessels in the area.

“We believe that the Norwegian Coast Guard’s habit of detaining foreign vessels in the so-called “fishery protection zone” are part of Norway’s policy of unjustified extension of its rights in the area of the archipelago contrary to the provisions of the 1920 Spitsbergen Agreement,” Zakharova underlined.

She added that Moscow calls on Oslo to “act in accordance to the spirit and letter of the agreement on the basis of which lies the idea of international cooperation and mutual respect for the rights and legal interests of the treaty’s signatory states.”

Oslo fully rebuffs the Russian allegations, as well as the calls for “bilateral consultations”.

In a comment to the this article, ministry Communication Adviser Ingrid Kvammen Ekker underlines that “Norway as a coastal state has the right to regulate fishing and enforce legislation in the fishery protection zone around Svalbard.”

“Efficient fishery regulation is important for the sound management of the marine resources,” she adds.

Ekker explains that Norway also previously has got reactions from Moscow connected to its inspection of Russian trawlers in the waters around Svalbard, but that no such diplomatic notes have been received over the last years.

Oslo has repeatedly made it clear that it will not change it policy line in Svalbard. In a newspaper article published in Norwegian media on 9th February this year, Foreign Minister Ine Eriksen Søreide made clear that she in no way willing to compromise on the interpretation of the Svalbard treaty.

“Svalbard is part of Norway [and] it is not natural that we consult with other countries about the execution of powers in our own areas,” she stressed.

She also underlined that Norway has the full right to exercise sovereignty in the 200 mile zone around the archipelago.

“The states that claim that the Treaty’s reference to the territorial waters also applies to the sea areas located outside the 12 nautical miles zone have chosen an interpretation that is in violation of international law,” she underlined.

Moscow has over several years significantly strengthened its presence in the Arctic and the Russian Armed Forces now operate a series of potent bases across the region. The westernmost is located in Franz Josef Land, not far from Svalbard.

With Russian Arctic militarization has come an increasingly articulate position on Svalbard.

In an extensive interview with newspaper Rossiiskaya Gazeta, the Russian General Consul in Barentsburg, the Russian stronghold in the archipelago, says Norwegian regulations increasingly are an issue of irritation.

He especially highlights environmental regulations and restrictions on helicopter traffic.

According to General Consul Sergey Gushin, the problems persist and “restrict the lives” of Russians in the area.

Russia can never leave the archipelago, Gushin underlines, because the islands are “to such an extent intertwined in Russian history.”

“Spitsbergen is also our land, it is covered by the sweat and blood of our ancestors,” the General Consul says.

“Historically, our chances of winning Spitsbergen were 50-50. In the end, Norway got it, but that does not mean that we should leave this place.”