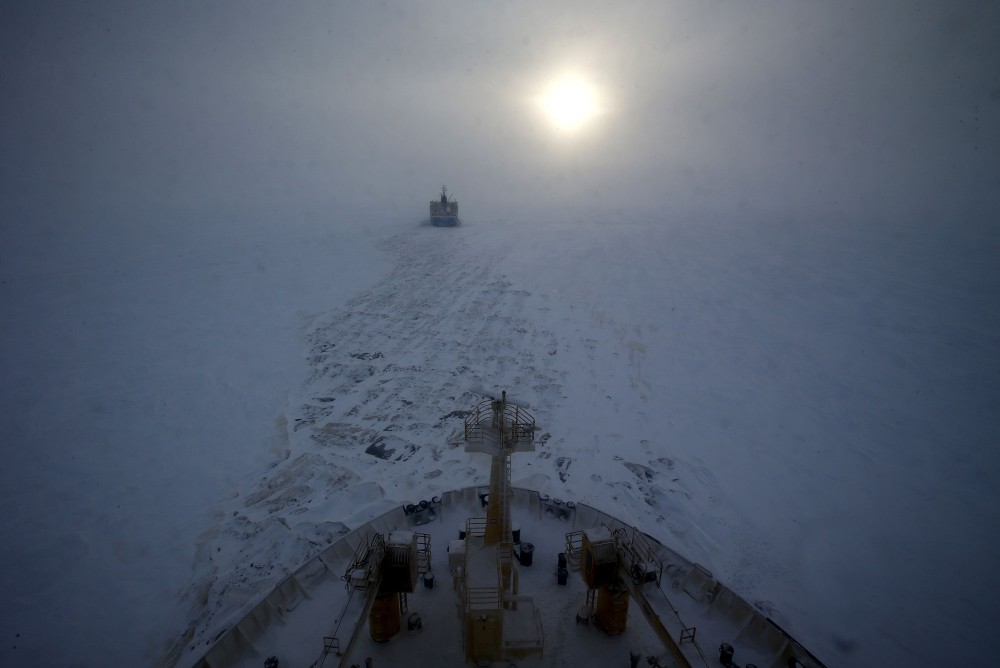 The Northern Sea Transport Corridor stretches from Murmansk to Kamchatka and might soon be of defining importance for Moscow's Arctic strategy.
Read in Russian | Читать по-русски
By

Until now, it is the Northern Sea Route (NSR) that has been the main reference point in Russian Arctic shipping. The route that includes the waters between archipelago Novaya Zemlya and the Bering Strait has become a top government priority and was highlighted in a recently adopted government policy paper on the Arctic.

The lion’s share of the goods is connected with the new LNG projects in the region.

But the rapidly growing shipments might still not be sufficient. President Putin has made it a national priority to reach at least 80 million tons of annual goods traffic already by year 2024.

State officials have grappled with the task, but might now be about to admit that the ambitious target is not within reach.

According to the Russian Association of Sea Trade Ports, sea route developers have guarantees for no more than 52 million tons of shipments by 2024. The remaining 28 million tons depend on loose promises made by extractive companies.

Among them is Rosneft that intends to develop its Vostok Oil, a project that is projected to deliver 25 million tons of shipments on the NSR by 2024. Until recently, also coal from the Taymyr Peninsula was to account for a major share of the NSR shipments.

Among skeptics is the Russian Accounts Chamber that in a recent report makes clear that the plan for increased goods volumes on the Northern Sea Route to 80 million tons “might not be fulfilled in time.” Among the reasons is that the project developers do not have the needed icebreakers, nor ice-class transportation vessels, the Accounts Chamber says.

The outbreak of the coronavirus and setback of the global economy is is making it even harder to meet targets.

The situation has made a growing number of stakeholders start referring to the Northern Sea Transport Corridor, a shipping route that stretches all the way from Murmansk in the west to Kamchatka in the east.

This expanded route includes also the Barents Sea and the Bering Sea and consequently covers significantly bigger shipping volumes than the shorter Northern Sea Route. With this extended concept, the Arctic planners in Moscow might be able to reach Putin’s 80 million tons target.

According to the Association of Sea Trade Ports, the transport corridor will be clearly referred to in the new Russian Arctic Strategy, a document that now awaits approval by government.

The document is authored by the Ministry of the Far East and Arctic and was submitted to government on the 7th May. The strategy covers the period until 2035.

The Northern Sea Transport Corridor was key point of discussion when the Russian Arctic Commission, a government body managed by the Ministry of the Far East and Arctic, assembled for a video conference on the 13th May.

“If we are to provide for the competitiveness of the Northern Sea Route then we have to widen the borders of the corridor, that is to include the western and eastern edges and there establish seaport hubs,” Deputy Minister Aleksandr Krutikov said in the meeting.

“Neither we, nor the Ministry of Foreign Affairs see any negative legal consequences from the use of this terminology,” Krutikov underlined in the Arctic Commission meeting.

Rosatom, the nuclear power company that has been assigned key responsibilities for Russian Arctic developments, has itself previously referred to the Northern Sea Transport Corridor as a priority. In an interview with newspaper Rossiiskaya Gazeta in late 2019, Rosatom representative Vyacheslav Ruksha underlined that the corridor will be of major importance for international Arctic shipping.

According to Ruksha, the development of international shipping across the corridor must be developed along with the building of new Arctic infrastructure and investment projects.

In 2019, Rosatom established a subsidiary that is to promote the initiative. The Rusatom Cargo will help attract international interest to the Northern Sea Transport Corridor, the company informs.

And the company is confident that future is bright for shipments. According to estimates, the goods volumes that are shipped across the remote and icy waters will increase to 120 million tons by year 2030 and further to 180 million tons by 2035.