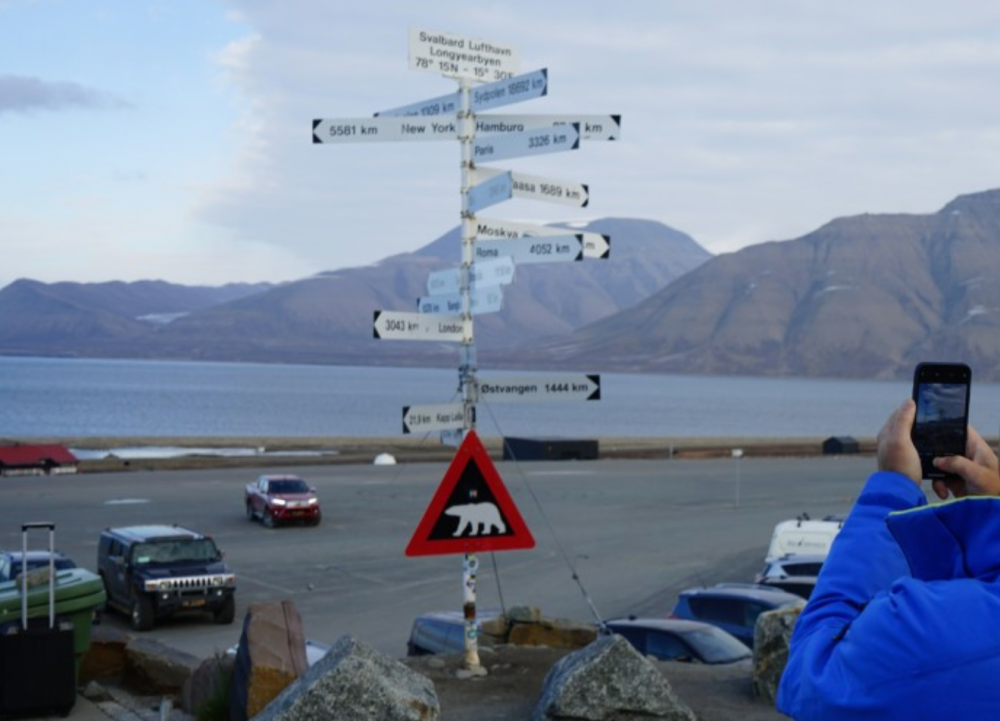 A polar bear warning sign is the first you meet outside the terminal building in Longyearbyen. The campsite is located across the parking and the road on the shores of Adventfjorden. Photo: Thomas Nilsen

The polar bear attacked the man at the campsite just next to the airport in Longyearbyen.
Read in Russian | Читать по-русски
By

The Governor of Svalbard was alarmed on the night to Friday about a man at the camping was attacked and wounded by a polar bear. The bear was shot by people on-site and ran towards the airport, which is located just nearby, informs assisting governor Sølvi Elvedahl.

The 38-year-old Dutch man, an employee at the camping, was sleeping in a tent when the polar bear attacked shortly before 4 am.

A police patrol rushed to the scene and secured the area. Longyearbyen hospital was alarmed and the victim was later confirmed dead by a doctor from the hospital.

The polar bear was shortly after found dead at the airport parking.

No others were wounded, but the governor’s office says six people who were on the site have been taken to the hospital and are being cared for by health personnel and the local crisis team in Longyearbyen.

In 2018, a cruise ship guide was wounded, but survived, a polar bear attack at Sjuøyene north of Nordaustlandet on Svalbard. The bear was shot dead by fellow crew members.

Last time a polar bear killed a person on Svalbard was in 2011. The bear attacked a group of students, who had camped near the Von Post glacier, about 40 kilometers from Longyearbyen. A seventeen-year-old British student was killed by the bear and four others were injured.

In the period from 1971 to 1995, four other people were killed by polar bears at Svalbard. Two of the fatal attacks happened in 1995.

On January 1st this year, a polar bear was shot dead in Longyearbyen by police officers after several failed attempts to scare the bear out of the populated area.

Earlier this week, the governor’s office used a helicopter when trying to chase away a bear with a cub from Hjorthamn, a cabin area across the fjord from Longyearbyen.

Polar bears are the largest species of bear in the world and have a circumpolar distribution. Males weigh between 300 to 700 kilos. According to the Norwegian Polar Institute, there are 19 different defined populations of polar bears in Arctic, that together contain an estimated 20,000-25,000 bears.