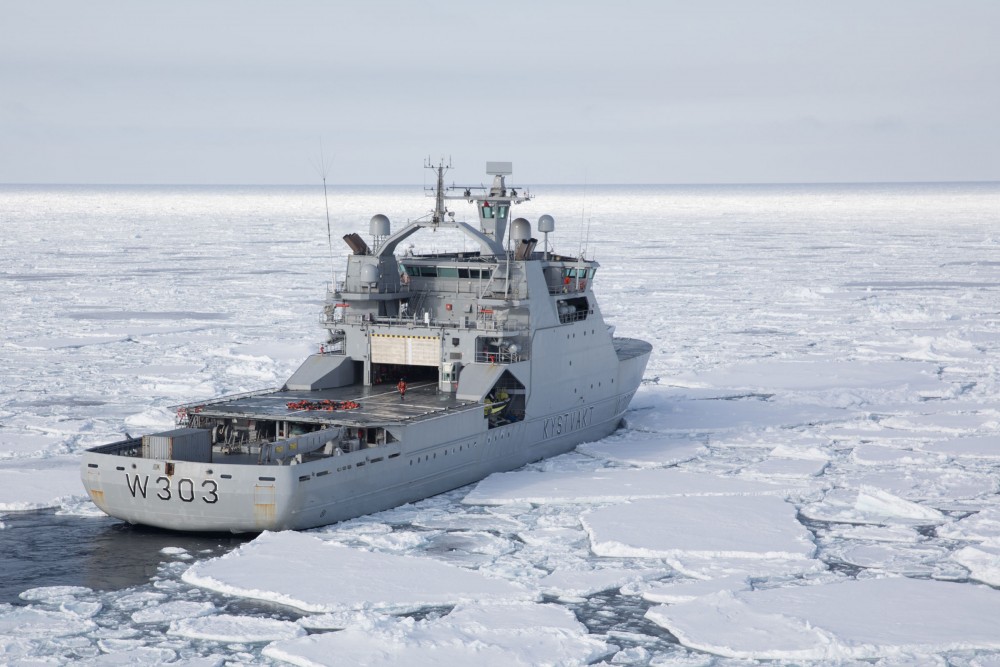 KV Svalbard is called in to recover three moored instruments vital for measuring temperatures throughout the Arctic Ocean. The job was supposed to be done by the the United States' Coast Guard icebreaker USCGC Healy, now at repair after suffering a fire and propulsion failure in August.
Read in Russian | Читать по-русски
By

KV Svalbard has over the last few days sailed in Russian exclusive economic zone (EEZ) and is Tuesday east of Severnaya Zemlya in the Laptev Sea. The voyage started on October 15, first north to Longyearbyen, then on a path north of Svalbard and further east to about 82.0° North of Franz Josef Land.

The Norwegian Coast Guard says the route will follow the ice edge towards the Beaufort Sea, a distance of 5,700 nautical miles. That will for the most be inside Russia’s EEZ, although much further north than the traditional Northern Sea Route.

Never before in times of record has the ice edge in the Norwegian and Russian Arctic been further north than this autumn. Also worrying, by late October the freezing season has not yet started in the Laptev Sea, The Guardian reported.

On board the Norwegian Coast Guard ship is a crew of 55 officers and some of the scientists participating in the international climate project “Coordinated Arctic Acoustic Thermometry Experiment” (CAATEX).

KV Svalbard wrote history last year, when it became the first Norwegian ship reach the North Pole. Also that voyage was part of the CAATEX project, when the deep-water moorings were deployed in the Arctic Ocean. KV Svalbard did the job in the European Arctic, while the USCGC Healy placed instruments in the Beaufort Sea.

This is the first time international scientists have done such comprehensive trans-Arctic under-ice study aimed at getting a better understanding of the dramatic impacts of climate changes. The project is led by Nansen Environmental and Remote Sensing Centre.

Data could be lost

If the instruments in the Beaufort Sea aren’t recovered soon, loads of important data for the CAATEX project would be lost.

When the Norwegian Coast Guard got the request to help, KV Svalbard was in dock for annual maintenance.

“I’m impressed by the Coast Guard, which in a short time managed to turn a precarious situation around, into a feasible operation for the international research community,” says Norwegian Navy Commandant Gunnstein Bruåsdal.

He assures that a thorough risk assessment is made, and the ship and crew are well prepared for the high-latitude voyage to north of Alaska.

Commander of the Coast Guard, Oliver Berdal, though, says the climate in the high Arctic this time of the year is a challenge.

“The Coast Guard will do our utmost to ensure that the moorings and the information they carry are brought ashore safely. However, the operation must be carried out in a safe manner and without great risk to personnel and equipment,” Berdal says.

The sun is soon under the horizon in the Arctic and polar darkness will come.

After the three moorings and the attached instruments are lifted onboard, KV Svalbard will set a straight course back to Norway.