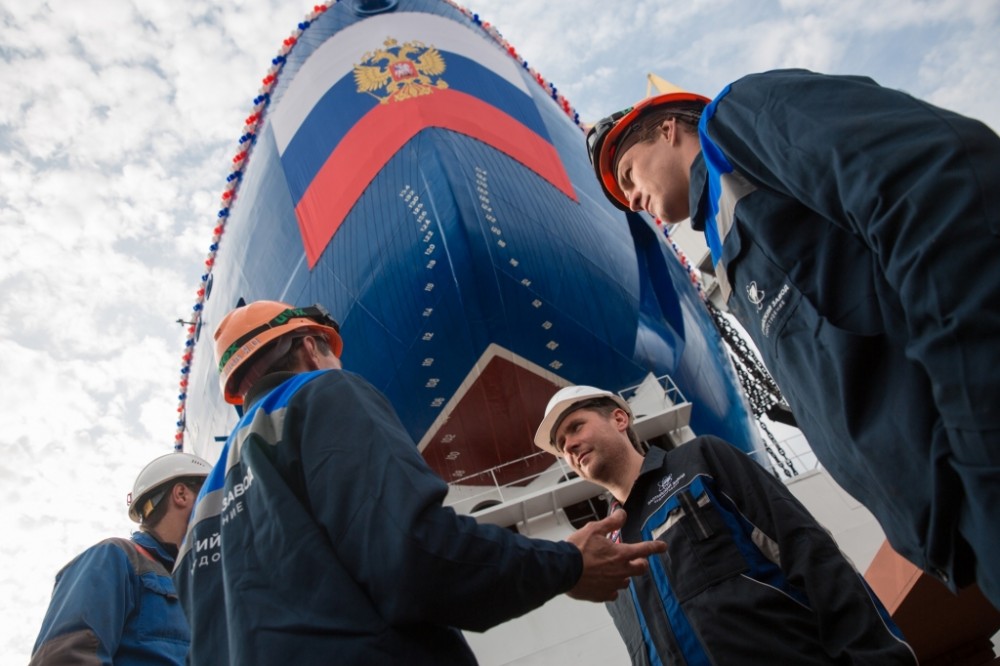 The fifth in a row of nuclear-powered icebreaker of Project 22220 will be laid down at the Baltic Shipyard in St. Petersburg on December 18.
Read in Russian | Читать по-русски
By

The icebreaker, to be named Chukotka, is planned for commissioning in 2027 and is the last in the series of the world’s most powerful icebreakers. The first, Arktika, is currently on her first working mission in the Ob Bay escorting commercial ships outside the Gydan Peninsula.

It is the Baltic Shipyard that announces keel laying ceremony set for December 18.

Three other icebreakers of the class are at different stages of construction at the yard, the Sibir, Ural and Yakutiya, all named after geographical locations in the Russian north.

Chukotka is the northeasternmost peninsula and marks the end of the Northern Sea Route before ships enter the waters of the Pacific.

The 60 MW strong icebreakers are powered by to water-cooled RITM-200 reactors. With such power, the shipyard says it is possible to break through 2,8 meters think ice. Such ice thickness, however, was not possible for the Arktika to test when she in October sailed to the North Pole. Simply because this time of the year there are no longer such thickness of the ice, neither at the top of the world or anywhere along the Northern Sea Route.

As reported by The Barents Observer, December started with exceptional heat across major parts of the Arctic. Russia’s meteorological agency, the Roshydromet, could inform about a temperature deviation from normal of more than 20 degree Celsius north of east Siberia on December 1.

Average temperatures along major parts of the Russian Arctic coast are this early winter between 10-15 °C above normal, and in November the deviation from normality in the region was set to 12 °C.

National Snow & Ice Data Center concludes sea ice extent averaged for October as the lowest in the satellite record and November ended up as the second lowest for the month.

Despite late growth this year, the Northern Sea Route along the north coast of Siberia is now covered with ice. How the late growth, the thin ice, and the extreme temperatures will effect the melting next summer remains to see.

When commissioned in 2027, the Chukotka, will like all of Russia’s nuclear-powered icebreakers get Murmansk as home port when not sailing the Northern Sea Route.