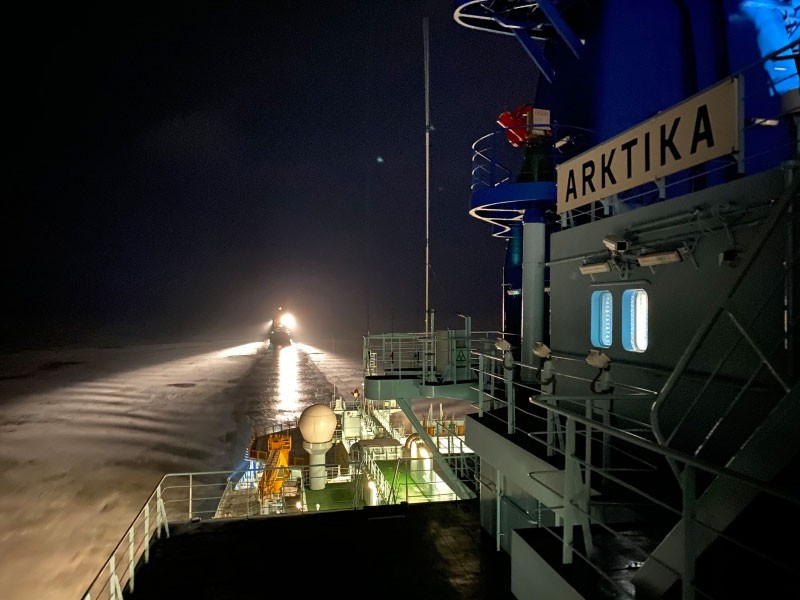 The "Arktika" in the Gulf of Ob. Photo: Rosatomflot

The Arktika has for the first time escorted a ship to the LNG terminal in Sabetta.
Read in Russian | Читать по-русски
By

The escort of bulk carrier Siyanie Severa was successfully completed on 24th November, Rosatomflot informs. According to the state nuclear power company, the speed of the two vessels was between 10-12 knots.

Sea-ice is against building up over the strategically important bay, but remains unnormally thin for the season, maps from the Russian Arctic and Antarctic Research Institute show.

“The first voyage of nuclear-powered flagship icebreaker Arktika into the Gulf of Ob demonstrated the vessel’s efficient operation in the ship channel,” says Atomflot Director Leonid Irlitsa. “It has excellent maneuvering characteristics and the draft of the vessel guarantees it safe icebreaking navigation across one of the most busy parts of the Northern Sea Route,” he adds.

As previously reported by the Barents Observer, the Arktika set out from Murmansk towards Sabetta on the 14th November, but shortly later for unknown reasons returned to Murmansk.

According to PortNews, repair works were conducted on the ship in the Kola Bay on the 16th of November. It was reportedly not connected with the reactors.

Atomflot Director Leonid Irlitsa underlines that the new icebreaker still is in a run-in period and that the ship crew can reveal mechanical faults only by testing the vessel.

“This is a normal process which takes place with the entry into service of any ship. The crew is getting to know the possibilities of the icebreaker, getting used to the ship,” he underlines.

The Arktika is the first vessel of Russia’s new LK60 class of icebreakers (Project 22220). It is powered by two water-cooled reactors of the RITM-200 type, an improved version of the KLT-40 reactors used on the older icebreakers sailing for Rosatomflot. It left the yard in St.Petersburg in late September and subsequently sailed to the North Pole. It is expected to be back in Murmansk by mid-December and shortly later return to the Northern Sea Route.

Another four icebreakers of the LK60 class are either under construction or planning.