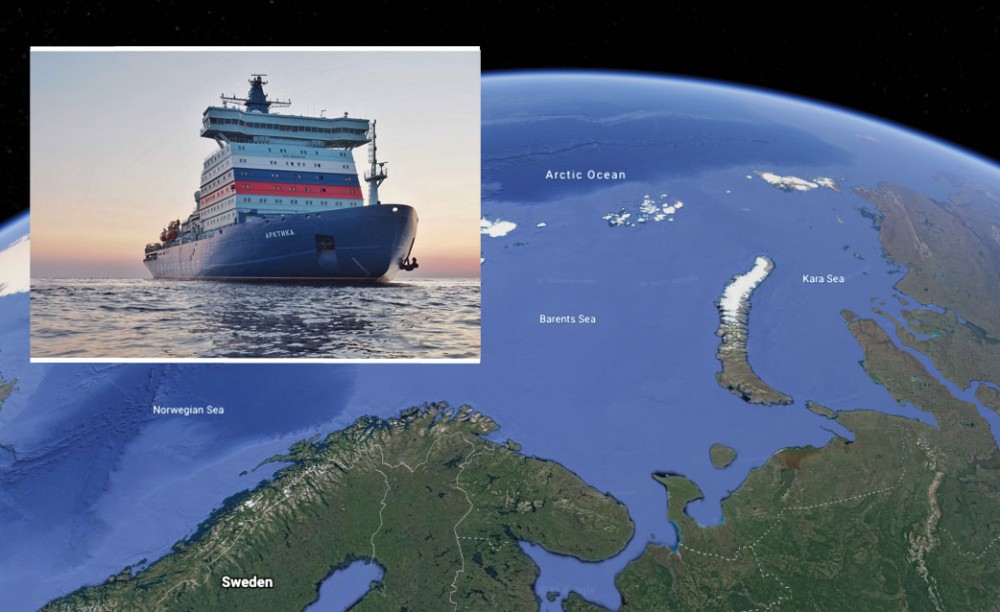 With ice edge at record north this autumn, the distance to the top of the world wasn’t too difficult for nuclear-powered Arktika on her maiden voyage.
Read in Russian | Читать по-русски
By

The 173 meters long icebreaker is the first in a series of five of the project 22220, the most powerful civilian ships ever built.

Sailing out from the Baltic shipyard in St. Petersburg on September 22nd, Arktika’s path took her north along the coast of Norway, across the Barents Sea to between Svalbard and Franz Josef Land, before heading into the Arctic Ocean.

Following a record warm summer in Svalbard and northern Siberia, the ice edge is currently at 85 degrees north. Never before has open water been seen so far north in the European and Asian parts of the Arctic Ocean.

In search of serious sea ice to test her capabilities, Arktika and her crew of 53 continued north from the ice edge and sailed straight to the top of the world.

On the way to the geographical North Pole, the maximum ice thickness reached three meters, according to Atomflot.

“In ice conditions, the vessel confirmed the characteristics for the class,” said Oleg Shhchapin, captain on bridge of the commissioning team for the icebreaker.

After finishing test sailings in the ice, Arktika will sail to homeport in Murmansk where Russia’s fleet of nuclear-powered icebreakers is based. Arrival is expected for later this week.

The four other vessels in the class, named Sibir, Ural, Yakutiya and Chukotka are expected to start operations from 2021 to 2027. All will be based in Murmansk, but mainly operate along the Eastern sector of the Northern Sea Route.

Second Arktika to the North Pole

Arktika is the second nuclear-powered icebreaker named Arktika to reach the North Pole. The first Arktika made history when she on August 17th, 1977 became the first-ever surface vessel to sail all north to 90 degrees.

After 33-years in operation, the first Arktika was taken out of service in 2008. For ten years, the icebreaker was laid-up at Atomflot north of Murmansk, partly awaiting its two reactors to cool down, partly awaiting funds for decommissioning.

The old icebreaker is now at Nerpa shipyard where decommissioning takes place.