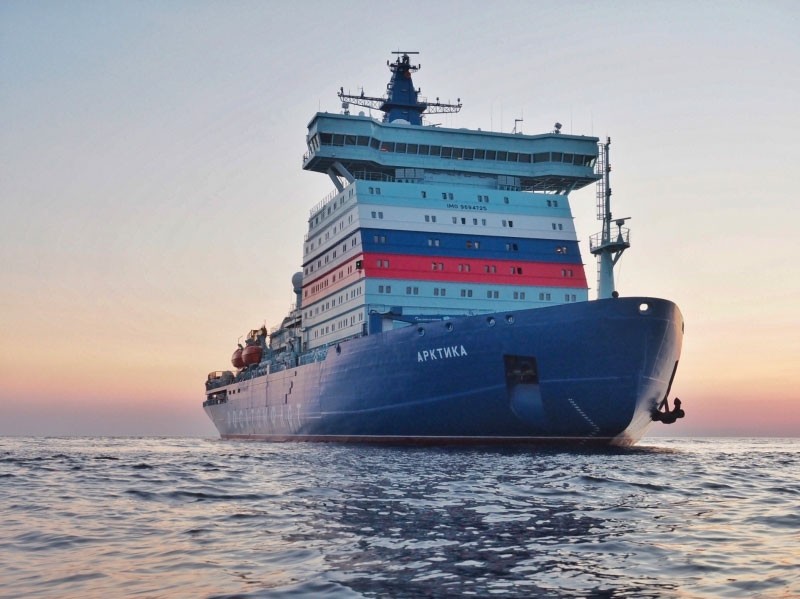 With only two of its three engines in operation, Russia's new nuclear-powered icebreaker is on its maiden voyage to icy waters.
Read in Russian | Читать по-русски
By

The ship on the 22nd September set out from the Baltic Yard in St. Petersburg with course towards the north. Before it arrives in home base Murmansk, it will break through sea-ice north of the Franz Josef archipelago, Rosatom informs.

According to the shipowner, the Arktika is due to arrive in Murmansk in about two weeks.

The sailing to Murmansk has been disputed by experts as the ship has only two of its three engines working. It was during sea trials in the Baltic Sea in February this year that a short circuit caused serious damage to the winding in one of the three electro engines.

Consequently, one of the ship’s three propellers is not working.

In a comment to the Barents Observer, Director of Bellona Murmansk Andrey Zolotkov in April 2020 underlined that the Arktika should have remained in St.Petersburg until the engine is fixed.

Zolotkov questions the maneuverability of a ship when one of three propellers is not working.

“In order to reduce all risks, it is advisable to leave the Arktika icebreaker in St. Petersburg and wait for the repair of the engine,” Andrey Zolotkov concludes.

The installment of a new engine is a major operation and the Arktika will have to return to St.Peterburg to do the job.

The construction of the icebreaker started in 2012, and completion was originally set to 2017.

Ahead of this week’s departure from St.Petersburg, the icebreaker has undergone a series of trials in the Gulf of Finland and the Baltic Sea, according to Rosatom.

The Arktika is Russia’s first LK-60 icebreaker (Project 22220), built to be able to crush 2,2 meter thick ice. Another four vessels of the class are to be built, the first of them due to be completed in late 2021. The last ship in the fleet, the Chukotka, is to be ready before 2027.