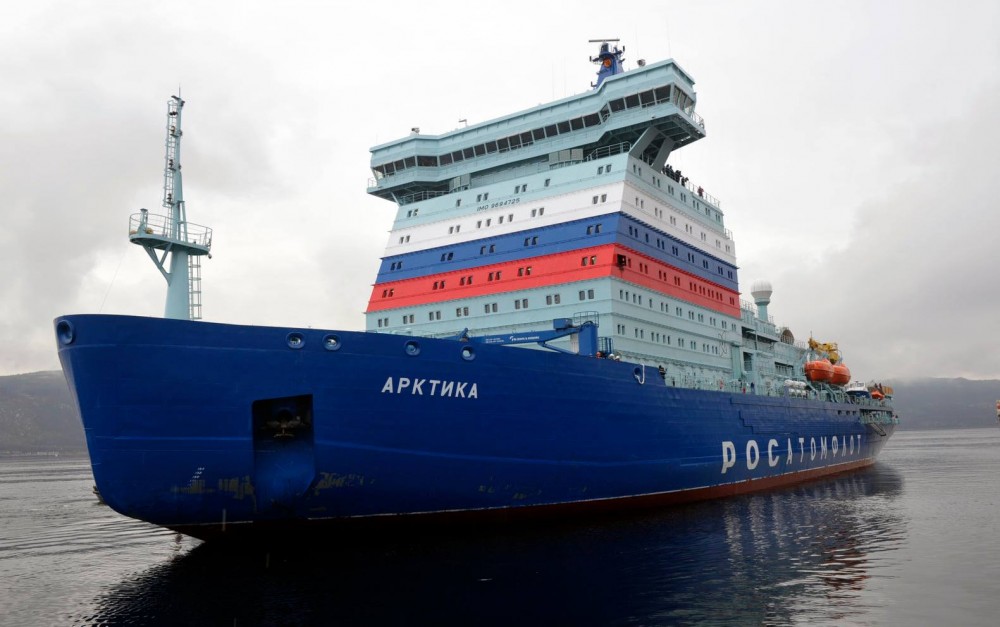 The powerful "Arktika" set off from Murmansk on Saturday for a three-week assignment to the Northern Sea Route. Mid-Barents Sea, though, the icebreaker turned around and sailed back to port.
Read in Russian | Читать по-русски
By

Following last month’s test voyage to the North Pole, and formal launch ceremony in Murmansk, the new giant icebreaker was now supposed to embark on her first real-working tour to the Northern Sea Route.

“Arktika” left from Atomflot’s service base in the Kola Bay on Saturday, according to the state-owned operator Rosatomflot.

Online ship tracking service VesselFinder.com shows the path of the icebreaker sailing out the Kola Bay on a steady course towards the Kara Sea.

Halfway in the Barents Sea, the ship suddenly makes a 180 degrees turnaround and sails back on a northwestern course before turning south on Tuesday directly towards Murmansk.

Asked about the hastily return to port, Head of the Communication department with Atomflot, Evgeny Sviridov says to The Barents Observer that “Staff is conducting adjustment works onboard.” He would not elaborate but adds: “The icebreaker will leave the port of Murmansk in the nearest future.”

In Murmansk, people have already started to post speculations on the regional Vkontakte page on what could have gone wrong.  Unconfirmed reports hint at “mechanical problems” onboard, and nothing related to the two nuclear reactors.

“Arktika” is the lead of five vessels of Project 22220, the world’s most powerful nuclear-powered icebreakers. Construction of two similar vessels, the “Ural“ and “Sibir” are currently well underway at the yard in St. Petersburg, while keel-laying of the fourth icebreaker, the “Yakutia” took place in May this year. The contract for the fifth, the “Chukotka” is signed.

When sailing north from the shipyard on September 22, there was already a problem with the propulsion. During sea trials in the Baltic Sea in February this year, a short circuit caused serious damage to the winding in one of the three electro engines. The damaged propulsion motor is 50 % functional and can deliver 10 megawatts of propulsion power to the starboard wing propeller. It’s a tandem unit and only one half of it was damaged during the sea trials.

Evaluations by the shipyards experts concluded that the entire engine has to be lifted out of the hull and replaced, a work that can’t be done in Murmansk.

In a comment to the Barents Observer, Director of Bellona Murmansk Andrey Zolotkov in April 2020 underlined that the “Arktika” should have remained in St.Petersburg until the engine is fixed.

Zolotkov questioned the maneuverability of a ship when one of three propellers is not working properly.

“In order to reduce all risks, it is advisable to leave the Arktika icebreaker in St. Petersburg and wait for the repair of the engine,” Andrey Zolotkov concluded.

“Arktika” and her sister-vessels are powered by two water-cooled reactors of the RITM-200 type, an improved version of the KLT-40 reactors used on the older icebreakers sailing for Rosatomflot.